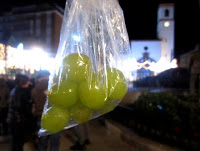 The tradition is called “las doce uvas” (“the twelve grapes”). On New Year’s Eve, when the clock begins to strike midnight, just about everyone can be seen popping grapes in their mouths. One grape per clock chime until you’ve consumed twelve grapes. If you succeed, it’s said that you’ll have a prosperous year. (Click any image to make it bigger.)

You can, of course, buy loose grapes and count out twelve yourself (in my world, that’s known as “cooking”). But all the stores sell pre-packaged versions just for the occasion.

Our first New Year’s Eve in Spain, San Geraldo and I joined the crowd at Plaza Nueva in Sevilla. We had purchased two New Year’s 12-packs of grapes. But when we popped them into our mouths, we discovered they had seeds. San Geraldo tried to keep pace while spitting seeds.

I swallowed. I’m sure I have an entire vineyard growing in my stomach… Along with watermelons. Wherever, that is, my stomach isn’t already stuck together with chewing gum.

Last year, our second New Year’s Eve in Sevilla, we were invited to welcome in 2013 at a private dinner where we were given individual containers of grapes — seedless for San Geraldo. Seeds for me to swallow. No problem.

This year, San Geraldo bought a beautiful bunch of seedless grapes from Ana Crespillo and made up a 12-grape plastic bag for each of us. We walked over to Plaza Constitución around 11:30 and waited for the clock (in the tower of the Church of Our Lady of the Rosary) to strike midnight.

Until the clock began to chime, we hadn’t noticed how large our grapes were. More like small plums. I can usually pop and swallow a grape at each clock chime (seeds included). But last night, the eighth grape joined seven others already in my mouth. San Geraldo was in the same boat. We did our best but I don’t know if we’ll be prospering in 2014.