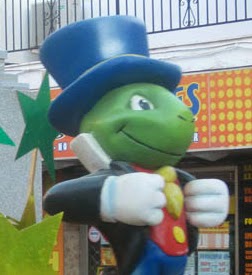 It’s called the “Cabalgada de Los Reyes” (The Cavalcade — or Parade — of the Kings”) and it happens in cities all over Spain every year on 5 January, the Eve of Three King’s Day. The participants throw candies to the spectators.

Sevilla had a huge parade with huge floats and horses (also huge) and huge bands and huge amounts of candy. (Click here to see last year’s parade in Sevilla.)

Fuengirola is a much smaller town than Sevilla (about 1/10th the size), but the cabalgada was still fun. No live horses, only two or three bands, but very well done and a very happy place to be. Oddly, every float was based on Disney characters. But then I’ve been told Disneyland is “The Happiest Place on Earth.”

Like New York’s Macy’s Thanksgiving Day Parade, where Santa Claus is rolled out, these Spanish parades welcome the Three Kings to town before they make their night-time rounds to deliver gifts.

I met Elena, daughter Paula (11), and Elena’s sister Ana, in front of Meson Salvador to see the parade as it began and headed off through the streets of Los Boliches into the center of Fuengirola. Tynan stayed home with son, Alexander, who had homework to do. San Geraldo stayed home, too. Party pooper. But, he and Tynan met us afterward for drinks.

Paula had a plastic bag to collect her candies. She and Ana did most of the work. Paula’s mid-air one-handed catches were astounding. I just let the candies bounce off my head into her waiting hands.