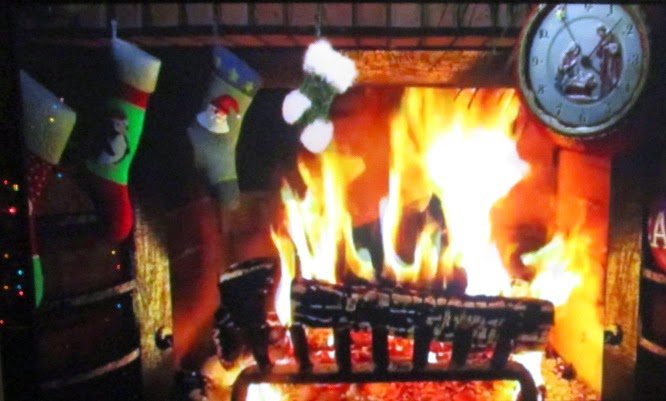 Our friends Tynan and Elena invited us to their home for a traditional Spanish Christmas dinner. Like San Geraldo, Elena is a gifted chef. But she has an entirely different repertoire.

Christmas Eve dinner at their house begins with Elena’s fish soup. Now, although I didn’t tell Elena before-hand, I have never met a fish soup I could tolerate. I can’t stand fish soup. But, this was their tradition and I figured I would be polite and eat what I was served.

I’m so glad I behaved. Elena’s fish soup is unlike any I’ve ever tasted (and I’ve tasted many). Absolutely delicious and nothing fishy about it — except for ‘good’ fishy. I could have made an entire meal of the soup. But there was more to come. Delicious pork tenderloin in a perfect sauce with a side of sliced potatoes and a splash of white wine. Exceptional.

San Geraldo provided the dessert — I provided the good lucks, charming company, and incomparable humility (although I’m sure Tynan thinks that’s what HE provided).

But back to dessert: “Beacon Hill Brownies” (from the Silver Palette Cookbook), a specialty of San Geraldo’s.

In addition to his brownies, San Geraldo had planned to bake a lemon meringue pie. He prepared his perfect pastry dough Tuesday morning and let it chill overnight. He took it out Wednesday morning intending to complete the pie. But our friends Anne (Slushee) and Darren texted us to meet them for coffee. Of course, we jumped at the chance.

San Geraldo forgot about the pastry, so it sat on the kitchen counter for two hours (not a good idea). When we got home, he put it in the oven and watched it melt. So he picked up a tray of pastries at the bakery. They were OK but unnecessary. The brownies were amazing. Tynan, who doesn’t even like brownies, ate three.

After dinner, San Geraldo and I had our first opportunity to try Wii video games. Yes, I know they’ve been around for eight years. We didn’t want to rush things.

We tried bowling (bolo) with Alexander (14) and Paula (12). They didn’t explain to us exactly how to work the controls until half-way through the game. Not knowing how to release the “bowling ball,” my first ball flew behind me and sent the spectators bouncing in the air. Still, I came in second. Alexander won.

After bowling, Paula and San Geraldo had a dance competition to The Village People’s YMCA. Paula was so surprised that San Geraldo knew the song and the moves. He did really well… once he sat down. Paula won.

And then, Tynan had a dance competition with his daughter. As payback for his turkey jokes (in defense, for once, of San Geraldo), I’ve included a 20-second video clip of Tynan shaking his booty to Abba’s “Gimme Gimme Gimme A Man After Midnight.” Paula won. But Tynan was so entertaining.

NOT San Geraldo and Paula…