There are 35 individual chapels within the walls of the Cathedral/Mezquita in Córdoba. Don’t worry. I won’t make you look at them all. I must admit, I tend to ‘speed-tour’ religious history. 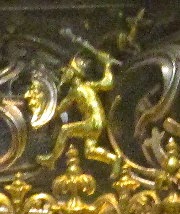 Click any of these images from the Chapel of Santa Teresa (in the center of which is a very large monstrance) to glorify.

If you’re a heathen, like me, I’ll save you some research time and explain that a monstrance is a vessel used in Roman Catholic, Old Catholic, and Anglican churches for the exhibition of some object of piety, such as the consecrated Eucharistic host…” (click here for more info from Wikipedia).


The Corpus Christi processional monstrance is a silver and gold creation made by Henry of Arfe, a German goldsmith. It weighs over 200 kilos (440 pounds). Since 1518, the monstrance has been carried through the streets of Córdoba during the Feast of Corpus Christi, 60 days after Easter Sunday.

What drew me to it was not it’s massive size and obvious value — although the ‘bling element’ did draw my attention — but the tiny little human and animal figures throughout. It’s my kind of art. I’d love to work on something like that. I wouldn’t even have to use gold.

San Geraldo’s god-daughter Erin (click here) does a brilliant imitation of Shirley Bassey. Sorry I didn’t ask her to do a little video recording for me. You’ll just have to make do with the original.