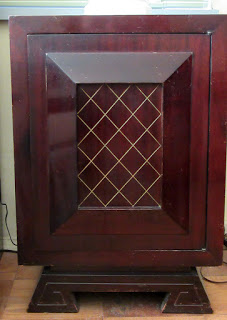 While cleaning out My Mother The Dowager Duchess’s apartment in August, we had some surprises. She and my father purchased their massive bedroom furniture in 1950. I found the original receipt. I have no idea how they afforded it considering the fact that my mother always claimed they were poor. They paid $846 in 1950. In today’s money, that’s equivalent to $8,472.39.

We would have loved to have shipped it here, but it would have cost a fortune. Besides, our largest bedroom couldn’t fit it all. The two dressers together were about 7 feet long.

I found a bunch of doily-like items in black and white. They’re provided free for women to cover their heads at Jewish rites such as weddings, bar mitzvahs, and funerals. Black for funerals, obviously, and white for the happier occasions. Typical of my mother (“I might be able to use it for a project”) she kept every single one. One drawer of the side cabinet in a dresser was filled with them. I laughed when I tossed them all on the bed. But then I discovered that two more drawers were also filled. There were hundreds of them. I can’t imagine that my mother actually went to hundreds of events. I think she stole a lot of them. But, she would argue indignantly, “I didn’t steal them. They put them out for free. I only took some extras… just in case.”