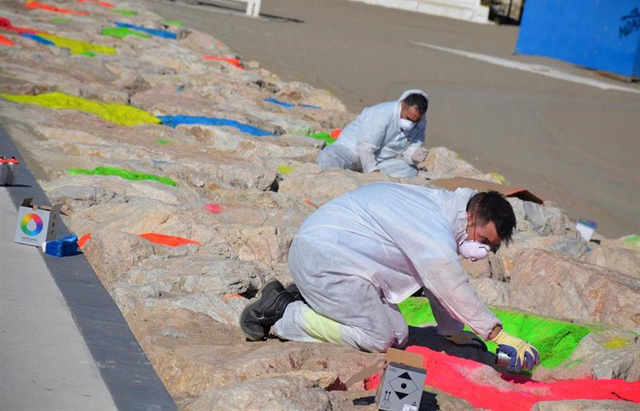 WHAT WERE THEY thinking? The City of Fuengirola thought it would be a brilliant idea to paint all the rocks on the town’s beaches in fluorescent rainbow colors. The Council thought it would “bring some color and life to the area.” Bring some color and life? To the colorful Costa del Sol? To the vibrant hues of the sky and Mediterranean Sea. To all the flowers constantly in bloom? One member of the council said “We just wanted to make it look like a giant mosaic.”

The jetty lining one beach was completed and the shocked reaction of residents and tourists quickly put an end to that. It required an emergency meeting at which time it was agreed the rocks would be returned to normal. The “decorating” was done in early March. As you can see by my photos from several weeks ago and from today, some of the colors may be here permanently (except for the ones hidden by the sand).

This morning while having coffee at La Esquinita (click here), we had a great visit with one of the staff. Her name is Marina. She’s one of those special people whose smile, warmth, and energy make any day better.

La Esquinita is in the process of decorating for Christmas. I didn’t know the Spanish word for garland, so I asked Marina. She said, “Guirlanda.” I told her it was “garland” in English and she said she liked the sound of the English word better. She said guirlanda was difficult to pronounce and she exaggerated the pronunciation. “Guirl-land-da.”

However, a moment later, a mildly puzzled and pensive expression appeared on Marina’s beautiful face.

Pointing at the garland, she called across (in Spanish) to the bartender, “Gonzalo, what’s the word for this? Guirlanda, correct?”

Gonzalo burst out laughing, shook his head at Marina, and said, “Guirnalda! Guir-NAL-da!”

I told Marina her Spanish appeared to be similar to San Geraldo’s English.