In 1969, I knew a person by the name of Cookie Tulip.  She was not the daughter of hippies; she was herself a hippie.  As far as I can remember, that was her name by birth.  I do clearly remember that her parents’ names were Saul and Bess Tulip.

The only reason I mention Cookie Tulip is because I wanted to use her name in the title of this post.  Other than that, she has nothing whatsoever to do with this post, except for the fact that her first name was Cookie and Jerry and I just baked cookies.

Initially, I thought I was going to write about this, the last time Jerry and I would bake Christmas cookies for our last Christmas in the USA.  Then, I thought, ‘Well, that’s depressing.’  I don’t like the idea of “last times.”  There are, of course, exceptions.  I was very pleased that the first time I had my wisdom teeth pulled was also the last time I would ever have them pulled.  It was a relief to know that George W. Bush’s last state of the union address was his LAST state of the union address.  But, in general, I like to leave the door open.  So instead of writing about our last time to bake Christmas cookies in the USA, I decided instead to write about the FIRST time Jerry and I would bake Christmas cookies in Irvine since we didn’t bake cookies our previous Christmas here. 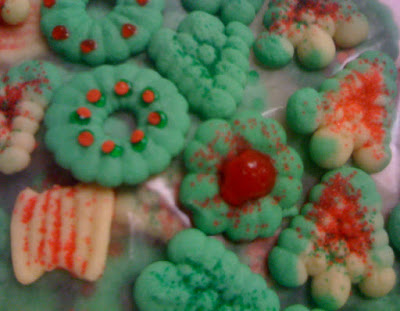 The cookies turned out to be such a laughable disaster that we’ve decided we’ll be baking another batch this week to redeem our Christmas cookie integrity.  So, after all my “last” issues, they didn’t end up being possibly the last cookies we would bake here anyway.

Since I don’t cook (and baking falls under that blanket category for me — as does nuking a bowl of instant oatmeal), I don’t really have to take the blame for the “spritz” cookies that wouldn’t spritz out of the manual cookie press I bought for Jerry (at his request) from Williams Sonoma a couple of years ago.  But I do enjoy decorating cookies.  And since, after about two hours, we managed to produce only about three dozen almost passable little cookies that I then proceeded to make even more hideous with my trimmings, I finally do have to share some responsibility.

Jerry thinks he figured out what went wrong with the cookie press.  So, ginger bread spritz cookies are still to come.  Keep a good thought for us… and the cookies.

We can check off another couple of items on our to-do list.  We drove over to the Social Security office in Mission Viejo today.  When the Social Security Administration went electronic some years ago, a data entry error was made and the spelling of Jerry’s name was changed.  We can’t have any confusion when we submit our visa applications, so Jerry had that corrected today.  At the same time, I thought it might be a good idea to order a new card for myself since my existing card was issued when my parents opened my first savings account.  The split goatskin has yellowed and the corners are frayed — not to mention that when I was in college I wrote a girl’s phone number on the back.  OK, it’s not really goatskin, but it is yellowed and dog-eared.  And by the way, Claudia Harfenist, I tried your number and it’s been disconnected. 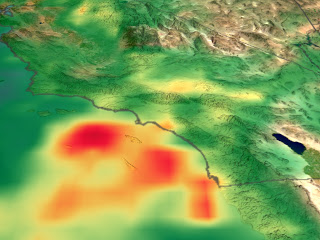 OK.  The rain has become a bit boring… not to mention extremely depressing.  We saw a break in the nearest layer of clouds today.  Sadly, all it revealed was the next layer of clouds.  That’s as much “sun” as we’ve had in a very long time.  I think we’ve had half our annual allotment of rain this past week.  I may be exaggerating, but not by much.  Apparently, there’s what is described as a “conveyor belt of moisture stretching all the way to Hawaii.”  It’s called the Pineapple Express.  It sounds so much sweeter than it is.  Well, from my perspective, at least it’s not snow.