I wrote briefly in an earlier post about our short-lived hotel in Palm Springs, one of several adventures we’ve had over the years.  We called our place Viola’s Resort in honor of Jerry’s great-great-grandmother.  Her real name was Wealthy Viola Furbish Lowell, but we decided to stick with Viola (which is what she went by).  Besides, “Wealthy’s Resort” would have been a bit presumptuous for first-time hoteliers and, as it turned out in our case, it also would have been ludicrous.

One afternoon in early 2000, standing in the Berkeley BART station, while heading home from our jobs at UC Berkeley — Jerry as university librarian and I as director of University Communications — I said, “I just can’t do this anymore.”

I was completely burnt out.  My job was destroying any mental stability I might have had.  Jerry wasn’t much happier.  His mother had died unexpectedly just a few month’s earlier.  He was tremendously frustrated with Berkeley’s bureaucracy, and he was taking more and more time off.  The cook at our favorite eatery, Tyger’s, in our neighborhood of Glen Park, saw Jerry there so often that he finally walked out of the kitchen and asked him, “Do you actually work for a living?”  Obviously, Jerry’s heart wasn’t in his work.  I didn’t think I could survive mine. 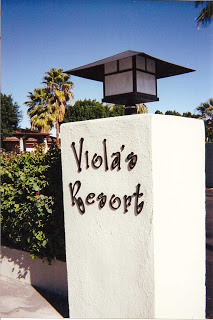 In response to my whine, Jerry, the reorganization expert, suggested we list our options.

I had been tentatively exploring corporate opportunities, but that didn’t excite me and I was so desperate to get out of my current situation that I had pretty much blown an opportunity a few months earlier — and, in my desperation, I couldn’t trust that I wouldn’t just jump into anything that came along (out of the frying pan into the fire); actually, the opportunity I had blown would have been awful, but I couldn’t see that at the time.  Jerry had gone the corporate route early in his career and wasn’t enamored with it.  Winning the lottery was clearly the best outcome, but we couldn’t do much planning for that.  Burger King didn’t sound ideal, but had moved up in the rankings. We were pretty sure option #4, the hotel, was where we were headed.  So Jerry then suggested we list out parameters to determine what was required and what didn’t matter to us (i.e., what could make any decision the right decision or the wrong decision).

We decided that if we wanted financial security, we could just keep things the way they were.  We also (fortuitously) decided that if things didn’t work out with a hotel, the worst-case scenario was that we’d go broke and have to start over — and we agreed that was something we could deal with.

Without much discussion, we agreed that Palm Springs, California, was definitely where our hotel should be.  We loved it there.  We loved the desert.  Property was affordable.  And it was a very popular destination.  The fact that it was a popular destination for gay people, as well, had a lot to do with our choice.  We did, however, agree that we did not what to open a place for gay men exclusively.  Our friendships are diverse and, although we loved staying at men’s resorts in Palm Springs and not feeling like a minority for once (the gay part, not the men part), we were very disappointed one Thanksgiving when we decided to go to Palm Springs with two friends (women) and discovered they were not allowed to stay at (or even come on the premises of) the place we loved.  For that trip, we finally found a gay-owned place that grudgingly welcomed women, but the entire process was disappointing to say the least.

So, for our own place, we decided we would open a hotel for gays and lesbians, their families, and their friends.  An LGBT-friendly, children-friendly, family friendly, diversity friendly, bed & breakfast–style hotel.  We did our research and learned we would be the first in the country.  The market was not huge, but the trend in “non-traditional family” business was encouraging.  And, most importantly, it would make us feel good.

We found a two-story ’50s-era motel/apartment complex, and were landlords for a few months before moving everyone out and renovating the property.  The property was right on Palm Canyon Drive, which we thought was a good thing for a family inn — the kids could make all the noise they wanted, restaurants were all around, and we would be easy to find.  We planted only child-friendly gardens (i.e., no cactus with spines, no toxic plants), with the most unusual plants we could find, including chocolate daisies (berlandiera lyrata).  These flowers look like scraggly daisies and smell like chocolate.

We opened with a bang.  We were fully booked the first couple of weekends, first with a family pride board’s annual event, then with lots of individual families.  One such family comprised two women and their brand-new baby daughter (one month old) along with the 92-year-old grandmother of one of the women. We were featured in the premiere issue of “And Baby,” a magazine said to be “redefining modern parenting.” Sadly, “And Baby” didn’t survive the recession any better than Viola’s Resort.

We took pride in what we had accomplished.  But we then quickly discovered that the market for our type of hotel was even smaller than we had anticipated.  No surprise were the single gay people who really didn’t want to be surrounded by a bunch of kids.  We did, however, have many return guests.  Couples and singles without children who loved to be around families; some wanted families of their own someday.  Men with children who loved the idea of being in such an accepting and inclusive environment.  Women with children who felt the same.

We had our share of “aha” moments.  We discovered that we really weren’t cut out for the B&B business.  We enjoy our free time way too much and when you own a B&B, you don’t get any free time.  It’s a 24/7 career.  Also, we were reminded again that male chauvinism is not just a straight male trait.  For example, we were sad to find that a lot of men with children would only visit if they knew other men with children would be there; some didn’t even want to be there with two-mom families.  Some other unkind things were said at times, but we reassured ourselves that, in addition to a loyal two-mom family clientele, we also had plenty of unbelievably wonderful two-dad families to make up for those less enlightened.  But, timing is a big part of success.  And our timing was dismal.  Seven months after we opened was 9/11/01.  Tourism in Palm Springs dropped 43 percent.  We had only a very tiny percentage of that number to begin with; we were already lagging behind our projections.  With the huge drop in business all over town and all over the country, we just couldn’t carry things.  We converted to a gay men’s hotel to bring in just a little extra cash while we tried to sell (which turned out to be an impossibility in those difficult financial times).  We still hosted some family weekends, but it wasn’t the same.  Even during those trying times, we had some wonderful — and enlightened — male guests.  But having a resort that excluded others just wasn’t our style.

During the brief life of Viola’s Resort, we met some exceptional people. We also had some high-maintenance visitors — like the billionaire’s daughter who actually snapped her fingers when she wanted something.  She traveled with her two children and her personal assistant (and her personal assistant’s young daughter). Given her behavior, I was immediately surprised when I saw that she didn’t find it beneath her to change her own children’s diapers until I discovered that she left the soiled ones wherever she happened to be when she removed them — in the middle of the floor in her bedroom or living room, on the patio, on the stairs.  By her third visit, I had gotten to know her well enough to realize she was probably well-meaning but just completely oblivious.

There was one little girl, around 2-1/2, who was insistent on petting the koi fish.  Her father finally walked over and said, “Honey, if you pet the fish, he’ll throw up.”  She immediately pulled her hand out of the water and walked away.  He saw my puzzled expression and said, “She hates the idea of throwing up and right now it’s the only thing I have to keep her in check.”  He then added, “Yeah, I’m going to be paying for years of therapy.”

So, we lost our shirts.  We added significantly to our stress levels.  But we discovered we could live in only three rooms, work together 24 hours a day, go broke together, and love each other even more after all was all said and done.