All is not going well in the land of apartment negotiations.  We thought everything was settled regarding the rental of the rose-colored palacio on Calle Cuna, but we haven’t been thrilled with the unwanted surprises being thrown our way by the owner — surprises that give us headaches and would cost us a lot more money.  So, it looks like we’re going to pass this one up.

EMPOWERMENT
We may not be as settled as we thought, but it opens up the opportunity to explore some more.  It also gives me the opportunity to use my Spanish with rental agents.  I just phoned and made an appointment for this evening so we can see a supposedly grand apartment near the Museum of Bellas Artes.  The woman on the phone was warm, friendly, helpful, and charming.  And, although my Spanish is bad (it’s especially difficult on the phone when I can’t use or watch body language), I was pleased to learn that my accent is clearly not American (or that of an English speaker).  After speaking in Spanish on the phone for 10 minutes, she heard me ask Jerry a question in English and she excitedly said, “Ah. You speak English!”  For the rest of the conversation, she mostly spoke beautiful English with Spanish thrown in when she got stuck. I then spoke a combination of the two languages and even learned some new words.  We’re meeting on a street near the department store, El Corte Inglés. When she told me the name of the street, I understood everything but the first word and asked her to repeat it twice before finally asking her to spell it for me.  V-I-R-G-E-N (you know, like virgin).  Should anything be read into the fact that I couldn’t understand the word “virgin”?  Anyway, we’re meeting this evening on Calle Virgen de los Buenos Libros (literally, Virgin of the Good Books Street).

THE PARADES PASSING BY

We are in the midst of the feast of Our Lady of Mount Carmel or, as she’s known in Sevilla, The Virgen (there’s that word again) del Carmen.  Most nights, we simply stumble upon pasos, spectacularly mounted statues of the Virgin Mary and Jesus being carried through the streets.

The ornamentation is spectacular.  The pomp — the escorts, followers, spectators, marching bands, and music — vary from average to exceptional. 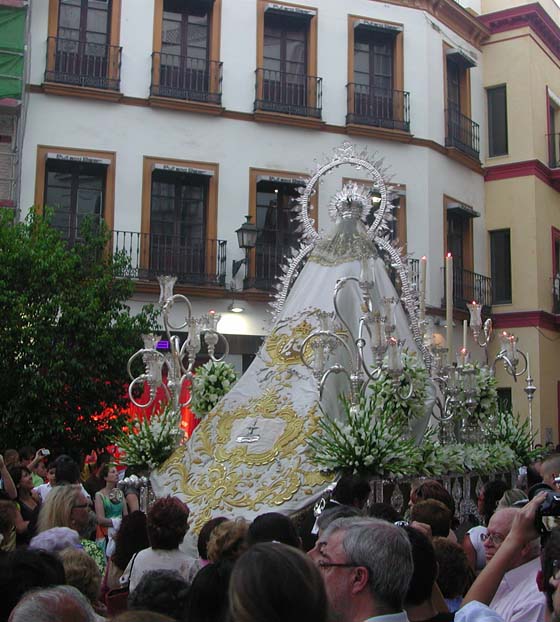 It is considered a great honor, a life-altering honor, to carry the virgin through the streets.  Depending on the size of the paso and the heat of the night, the job can be simply cumbersome to completely exhausting.  But the men who perform the service are extremely proud to be allowed the once-in-a-lifetime opportunity.

25 thoughts on “Possibly Passing on the Pink Palacio”