Last night, we had dinner at Carmela, a restaurant in the plaza Santa Maria de la Blanca.  We chose Carmela because, even though it was past 9:00, it was still extremely warm outside. Carmela takes up a very large area in the plaza and there were wonderful breezes coming from all different directions.  Every time we’ve walked by the restaurant, it’s been busy.  Also, the tapas specials looked really good.  I chose not to carry my camera with me.  Poor choice.  And, having a temporary local mobile phone, I no longer carry my iPhone (maybe I’ll get a new SIM card to use it here or maybe I’ll upgrade my phone when I get my permanent service), so I didn’t have that as a fallback camera.  You’ll just have to use your imaginations this time. And I’ll have to carry my camera in the future.

We ordered Mojitos.  We LOVE Mojitos.  These were our first Mojitos Sevillanos, and they were absolute perfection (they might even have been the best we’ve had).  While we enjoyed our drinks and waited for our food, a woman arrived with an entourage and took over a couple of tables in the plaza right near the restaurant’s service bar.  She then went and took a table from inside to add to her collection of tables.  There was a bit of a discussion with the waiter and he then carried the mismatched table out for her.  She then “stromped” around the plaza collecting chairs.  “Jeez,” we both commented, “She acts like she owns the place.”  We couldn’t believe how pushy she was.  The place was mobbed and, when we arrived, there were only two servers.  This pushy woman would call out to them and get up and ask for things, never giving them a break.  Our food arrived (it was delicious) and we briefly forgot about the grande dame. 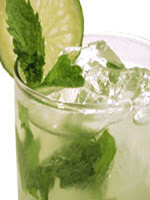 Soon, though, Jerry noticed her picking up empty glasses from her table and carrying them up to the bar.  He then commented, “You will NOT believe this.  She just walked behind the bar.  I think she’s washing a glass.”

“Wait a minute,” we both thought (we’re not THAT slow).

She walked from table-to-table picking up glasses, and taking them into the kitchen.  Then, she started busing tables.  She picked up our empties and — warmly, graciously, and kindly — asked us how everything was.  So, not only did she ACT like she owned the place, she DID own the place.  In addition, she wasn’t above some hard work while hosting a night out with friends.  That’ll teach us!

We ended our meal with tartas chocolates con helado hierbabuena — chocolate “tarts,” that were a cross between chocolate pudding and chocolate cake, with mint ice cream.  Dessert was so good we moaned as we ate it.  It was an exceptional place for food, drinks, fresh air, and people-watching.  And it was not at all expensive.  We can’t wait to go back.

THE SEARCH FOR A HOME

We looked at two apartments yesterday afternoon.  The first was very large and very grand — but very tired and rundown.  The second was two stories, smaller and quaint, but exposed to the street and the other apartments in the courtyard.  Seeing what’s around for the price really helps us make a more educated and enlightened decision.  I am still exchanging emails with the agent who’s handling the pink palacio.  She is extremely pleasant and we’re hoping we’ll be able to smooth out the kinks in the deal with the owner.  So, we might still end up in the pink palacio.  We meet with the agent and the owner Monday morning.

I am truly enjoying speaking Spanish.  But, dealing with rental agents and bankers requires me to communicate at a level beyond my abilities.  I can make do with rental agents and we know where to get assistance with contracts and agreements.  But, we definitely need to open our local accounts at a bank that has someone who can work with us in English.  We did our research and found the bank that offered the best services for us but, until today, we could not find a branch that could help us.  So, after breakfast I walked over to the main branch.  It’s located near the cathedral, which is where so many English speakers do their business.  Success!  We have an appointment with an English-speaking banker Monday evening.

I’m sure it’s a challenge at times to understand me because I know I’m creating my own words (soon there will be Mitchellisms).  But, it is clear that the locals appreciate my attempts to communicate in their language.  Quite often I notice that I receive a very cool welcome in a store only to depart feeling like a friend.  Sevillanos seem to take great pride in their amazing city and our love for Sevilla clearly pleases the people we meet.  Today, I stopped at a small pharmacy to pick up some sunscreen (for my ever-growing forehead).  I had a wonderful visit with the initially cool pharmacist.  When I paid the cashier — after telling them both about our retirement, our apartment hunt, our plans to live permanently in Sevilla — the cashier asked me if I was from France.  (Have I mentioned how happy it makes me that my Spanish doesn’t immediately brand me as American or English-speaking?)

I’ve ended with a photo I took yesterday of a Common Swift.  We see them and hear them (a very sweet, not unpleasant or sleep-interrupting sound) outside our hotel window every morning.  Difficult to get a clear picture.  I did mention they’re called “swift.”

17 thoughts on “She Acts Like She Owns The Place”