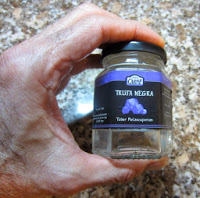 San Geraldo went shopping the other day. First stop was Ana Crespillo’s produce market. Then he dropped off the goods at home and headed back out to the supermarket.

San Geraldo always loads up two large reusable shopping bags at Ana’s. This time, he came home with two additional bags, as well. He plans to start baking holiday goodies. We have the benefit here in Spain of extending the holiday through the Day of the Three Kings on January 6 (the traditional Spanish day to exchange gifts), which means San Geraldo isn’t officially late with his baking. However he is, as usual, spending (to my mind) a small fortune. Added to the fact that the ingredients for many of his baked goods are expensive, there was Christmas dinner-for-two to prepare.

At the supermarket San Geraldo found a big expensive poularde and brought it home. Who knew poularde was simply a big fat, fatty chicken that had had its ovaries removed so it would never lay an egg? Well, maybe you did (especially you French chefs), but I sure didn’t. I didn’t know if it was a small turkey, jumbo chicken, or medium goose. San Geraldo prepared it beautifully, but we won’t be having it again. Much fattier than we’ve become used to. I didn’t complain because the chicken was truly good and he made a dressing filled with pine nuts. And I never complain about anything with pine nuts.

There was a sauce with the most plump and sweet apricots and prunes, and the unbelievably good dressing was simply bread and two black truffles. San Geraldo had never had black truffles. So he bought a small jar. They did have a spectacularly rich, full flavor. But 9 euros for two truffles that weren’t chocolate? I was in shock.

San Geraldo just now returned yet again from the supermarket. He came home with another container of truffles, thankfully not another 9-euro container. Still, an extravagance. But I’m not complaining.

We don’t have a lot of money. And, obviously, we don’t wisely spend what we do have. I can’t say we’ll never be able to afford to retire, because we already have. But I’m thinking one of us (San Geraldo) may have to go back to work. However, as long as I’m being honest with you (and I’m always honest with you), the only reason I even wrote this post was because I wanted you to see the below informative video about Australian investment opportunities. This could be money well spent.