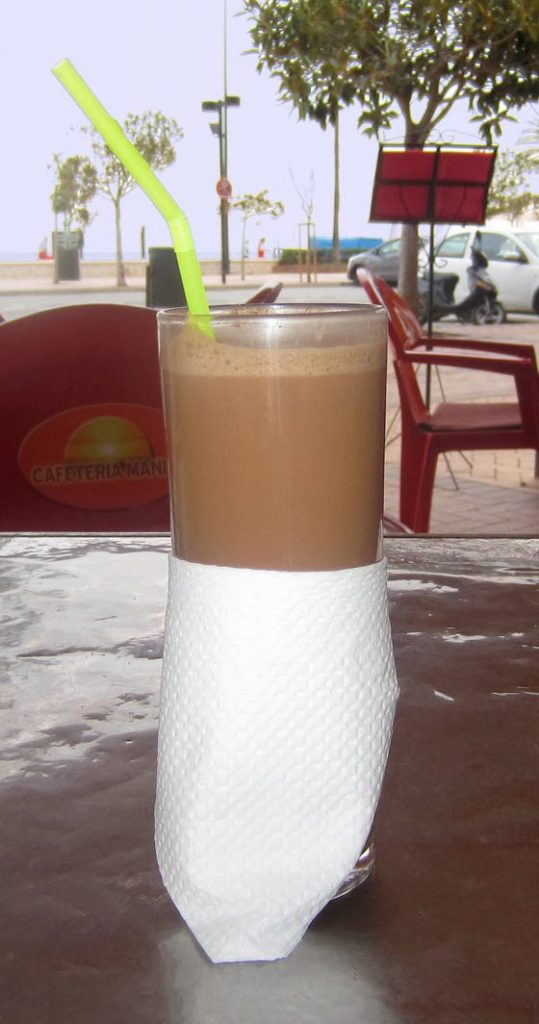 San Geraldo and I went for a good, brisk walk Tuesday afternoon. We had some appointments to make in the center of town and thought it would be a good way to kill two birds with one stone (as they say). Or as San Geraldo said, “We can kill 28 birds with one stone.” (And this from a bird lover!) Given that the once again “svelter” San Geraldo moves at a brisk clip, I love walking with him.

On our way home, we passed Café Manila and San Geraldo suggested we stop for a coffee. Once I sat down, I wasn’t in the mood for a coffee and, it being a gray, less-than-warm, winter afternoon on the Mediterranean Sea, a beer didn’t sound like a good idea either — even though a beer, like our coffee, only costs 1€. Sam asked what we wanted and when I couldn’t decide, she suggested a “La Mambo” (or at least that’s what I thought she said). I asked what it was and she said, “hot chocolate and brandy.” How could that possibly be bad? Café Manila serves it no frills, which is fine with me. They only charge 2.50€ for it.
Well, it wasn’t bad. Not bad at all. In fact, it was so good I could have easily had another. But I refrained. San Geraldo took a sip and liked it so much he demonstrated some of his newly acquired Spanish. “Ooh La La!,” he exclaimed. (Okay, maybe he needs to study some more.) It’s my new favorite drink… of the week.
It turns out the drink is not called La Mambo. It’s actually called “Lumumba,” named for Patrice Lumumba, the first democratically elected and tragically brief and short-lived prime minister (1960) of the Republic of the Congo.
The traditional version of the drink is made with cacao and rum (sometimes with the addition of cream, sometimes with amaretto or brandy). It can be served hot or cold (Hot Lumumba or Cold Lumumba). Mine was hot — perfect on a damp and chilly afternoon. My mis-hearing of the name had me singing along with Rosemary Clooney (and dancing with Sophia Loren) on our walk home.

Rosemary and Sophia were only in my head. My singing was aloud. Lucky for you, no video of me…