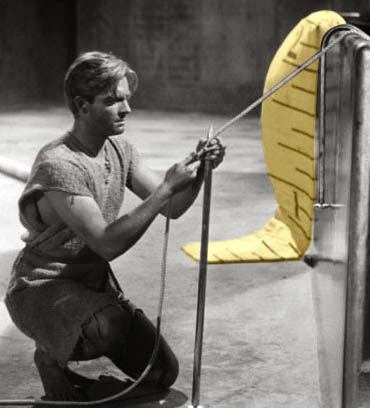 If you’re from here in Spain, you would say San Geraldo has lost 20 kilos. If you’re from the UK, that’s 3.1 stone — or 3 stone, 2 pounds. And if you’re from the USA, he’s lost 44 pounds. It’s a lot of weight and he’s still losing. (And he won’t strike a pose for the blog.) He’s got a closet full of clothes that are too big. I’ve given him some of my shirts and sweaters (that were a little too baggy on me and look better on him anyway). Otherwise, his old shirts look like muumuus. And he and I could probably fit — together — in a pair of his jeans (which is an idea).

Everyone has been telling San Geraldo he needs to get some new clothes (especially jeans). But he hates to shop. On Tuesday after morning coffee, Linda, Tom, (sister and brother-in-law) and I nearly got him to the department store, El Corte Inglés. There’s one just a few blocks from our house. But we three turned the corner and San Geraldo, being no longer “in the mood,” did not.

Elena said she was coming over at 10:00 Friday morning to drag His Highness out to shop. He had Spanish class, so wormed his way out of that, too. However, he earned major points Thursday afternoon.

We were running errands and passed the main El Corte Inglés. I suggested we stop and, to my shock, San Geraldo agreed. He tried on five pairs of store-brand jeans. None fit correctly. It wasn’t fun. For either of us. I entered the store with Felíz (Happy) and I left the store with Gruñon (Grumpy). A name brand would work, but Levi’s are about 100€ here. We can get three pairs for that money when we next visit The Dowager Duchess. He’s got some Scottish blood running through his veins. Maybe I’ll buy him a kilt. Or, as our grand-niece Eloise would say, “Ummmmm, maybe not.”