WE HAD AN early Christmas dinner Friday night with our dear friends Elena and Tynan, and their dear kids (19 and 17), Alexander and Paula. A perfect meal at their home that started with chistorra, a fast-cure pork sausage flavored with garlic, salt, and paprika — from Aragon, the Basque Country (where Elena is from), and Navarra, all in northern Spain. That was followed by cinta de lomo (pork filet) roasted for hours with vegetables (and wine), and perfect roasted potatoes.

The wonderful company and conversation was capped off by two of San Geraldo’s specialty desserts, lemon-raspberry bars and Beacon Hill brownies. SG makes these look so easy. When the brownies were plated up, he told me they were “a piece of cake” to make. After he readied the lemon bars, he said “They’re easy as pie.” He’s told me in the past that producing one of his to-die-for chocolate cakes is also “[as] easy as pie.” I wonder how he would describe baking a pie. Well, I suppose that’s obvious: a piece of cake. 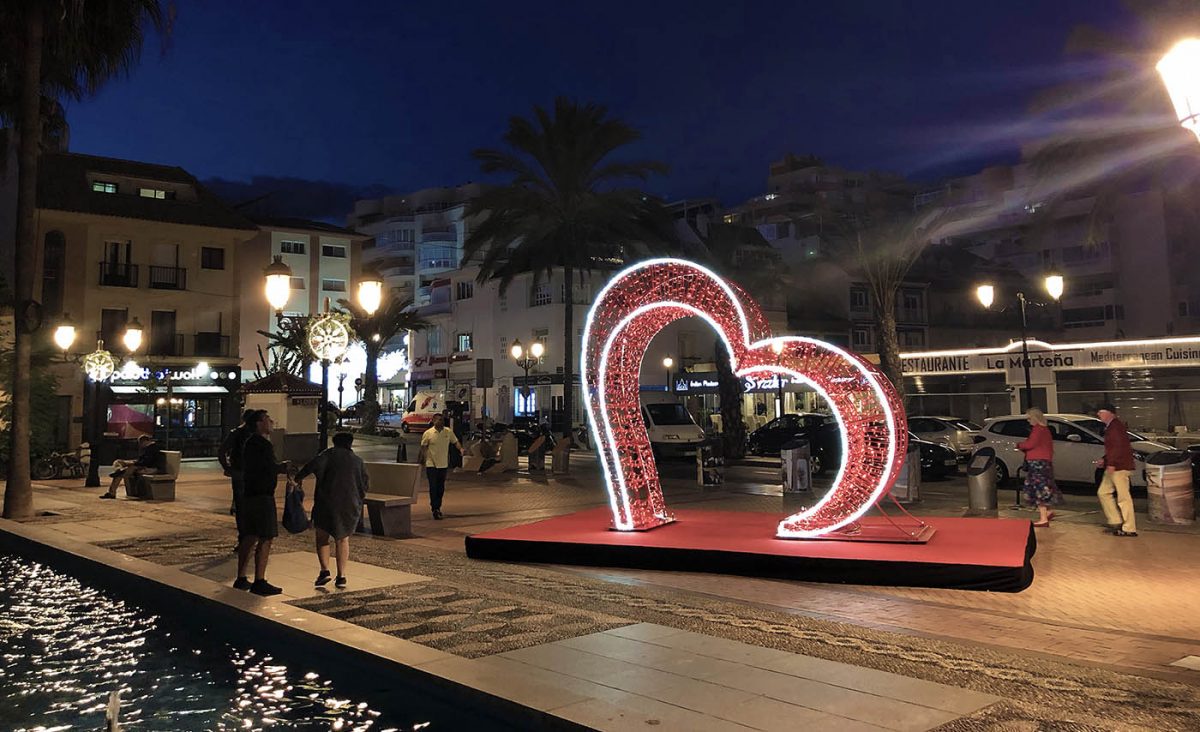 WE HAVE A big, twinkly red heart in our plaza for the holidays. Usually we have a very tall Christmas tree (of lights, not a real tree). Maybe Fuengirola has become socially aware and opted for non-denominational holiday decorations. Nah… I don’t think so.

The municipal nativity scene (called a Belén, which means Bethlehem) is back on the plaza in the center of town (about a 30-minute walk from here) alongside the [hideous, in my humble opinion] statue of Isabel and Ferdinand (the “Catholic Monarchs”).

The heart in our neighborhood is quite nice, if just a bit incongruous. I wonder if it will remain for Valentine’s Day.

Anyway, I love the Belénes that get displayed in Spain. If I had lived here longer, I definitely would have built my own collection. I used to love building dioramas when I was a kid (my parents didn’t think it was a very masculine pass-time); I’d be in heaven (atheist heaven) with my very own Bethlehem. But, speaking of incongruous, my version wouldn’t include the holy family.

I think I’m suffering the post-holiday blues. Given my life with clinical depression, I suffered the pre-holiday blues and the mid-holiday blues, as well. But, these past couple of days have been a bit worse than the rest.

Dudo and Moose don’t care. As long as there are birds to watch (and a drain hole to monitor). I wish I could be more like them.

We’re planning a September whirlwind tour across the United States, beginning and ending with the Dowager Duchess. Not lots of time in any one place, but some very special family visits that are long overdue. It’s still more than two months away and the days are already filled.

San Geraldo always acts as our travel agent and he does a phenomenal job finding flights, getting good seats, scheduling connections, getting in touch… He finally booked all the separate flights that will take us from Málaga to the Northeastern US to the Plains States to the Pacific Northwest and back again.

Even though the boys won’t be joining us, Moose has assisted every step of the way. He’ll be in big trouble when Dudo finds out.

A few weeks ago, I told you about my long weekend in Madrid staying with Guadalupe (click here for the last of several posts on that trip).

Guadalupe and a few of her friends can communicate fairly well in English. Other of her friends are fluent — and probably have a much better academic knowledge of English grammar than I do… than do I… than I… In addition, some are also fluent in French, German, and Italian. One friend is even fluent in Hebrew. All I could remember how to say in Hebrew was, “What’s this?,” “I go to Hebrew school,” and “Koopy is a good monkey.” Phonetically, that’s “Koopy cove tove,” if it ever comes up in conversation.

Putting Koopy aside… The core group of five professional women started a business together called “Your Spanish Friend.” They host people in their homes and offer a few days or more of immersion in Spanish conversation while sharing the city of Madrid from an insider’s view.

This all sounds like an advertisement and I don’t mean it to be that. I just thought I’d let you know about it in case you’re interested. Although Guadalupe and I had recently become friendly, we weren’t close friends and really didn’t know each other very well. I agreed to go up for a visit and was kind of nervous about staying in someone else’s home (not my favorite way to travel) and spending so much time in such close proximity to a fairly new acquaintance. I also love to travel independently, so didn’t know how I felt about being taken around Madrid by someone else.

The entire visit was a revelation. First, the homes are large and elegant. I had my own beautiful room and private bath. I know people with apartments smaller than that. So, staying in Guadalupe’s house was like staying in an elegant B&B — with the added benefit of feeling part of a family (and being able to eat whenever I wanted). We spent the entire weekend speaking only Spanish. At times, my Spanish was comical, but I can’t believe how much I improved, and how relaxed I was the entire time.

You may remember the photo I shared of Guadalupe and her friends. They are all gracious, fascinating, classy, relaxed, warm, kind, funny, knowledgable. I could go on an on. I fell in love. I told San Geraldo even he (yes, even he) would have had a great time.

This is not a shameless plug since it’s not about me. Check them out at www.YourSpanishFriend.com and on Facebook at www.facebook.com/YourSpanishFriend. (You may recognize some of the photos. I sent all of mine to Guadalupe.)

Koopy
During your next trip to Spain I know you’ll be asked about Koopy the monkey (he comes up all the time, as you can imagine): When asked, all you need to say is:“Koopy es un buen mono,” because Koopy is a good monkey.