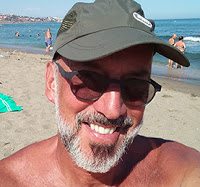 I used to hate wearing hats. Since arriving in Spain, however, I discovered that if I wear a decent hat when it rains, I don’t have to carry an umbrella.

That hat became known as my Frank Sihatra Not (as friend Darrin said when his tongue slipped, meaning to say “Frank Sinatra hat” — click here for that story).

I’ve had a shiny head for many years and the sun has never bothered me. This year, however, I’ve noticed I’m not as tough (meaning “young”) as I used to be when it comes to the sun’s heat. I’ve been hit with heat exhaustion a couple of times and I don’t want to end up with heatstroke.

I popped into a local market this morning while out for a walk and I found a lightweight, casual cap (as opposed to the two summer-weight Frank Sihatra Nots I have in the house).

I like everything about the cap except for the fact that it’s got a little tag that says “SPORTS.” There were other hats without the tag but they were heavy canvas. I shared my thoughts with the shop owner. He told me I was “delgado” and “un deportista” (slim and an athlete) and “Eh-sports” (his pronunciation) was appropriate in my case. I bought it. Hook line and sinker.

So, back to the title of this post: I am the Cat and this is my hat.