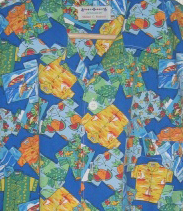 Although I am not thrilled to post current photos of myself and do so rarely, I am happy to share a few photos today. It’s not that I mind that I’m not as young as I used to be. I just hate photos of myself. I hated looking at photos of myself at 15 when I was 15, at 30 when I was 30, at 40 when I was 40. Now I don’t mind those. So, maybe when I’m 90, I’ll like looking at photos of myself at 50… OK, 50-plus. OK, OK, 50 and a lot of pluses.
But these photos are for a good cause. The shirt (also know as the Spo Shirt, Shirt of Shirts, and Traveling Shirt) was created by a talented and generous American blogger, Ur-spo, who at the suggestion of another blogger, Cubby, sent this handmade shirt on a world tour in late 2010. Ur-spo is donating money to charity for each person who wears the shirt and shares a photo. A number of charity options were provided; my choice was Doctors Without Borders.

As you may remember, my camera died (well, I killed it) recently, so photos from my phone are the best I can do while I wait for my new camera to arrive. My gratitude goes to Lola for doing such a good job with a limited resource and a difficult model. From the two shots I’ve included, you’d think all I do is wander the sunny streets going from bar to bar. Definitely not the case. Really. The shirt has almost completed its world tour; I think it’s got four-or-so more stops before it is handed over to Cubby, the mastermind of the charity tour. I am number 29 on the list of lucky recipients and I am honored to participate.

The shirt came to me after a stop in Derbyshire in the UK. Next stop is somewhere in Australia, New Zealand, California, or Texas. I await my instructions. And, if Ur-spo ever decides he’s had enough of his work as a psychiatrist, he can take up tailoring for a living. The shirt is beautifully made.