Our upstairs neighbors (sadly, soon to be our former upstairs neighbors), Anna and Carlos, invited us for a spur-of-the-moment lunch with some of their friends. There were 12 of us, plus three children under the age of 7. Amazingly, everyone (including the 3-year-old) spoke English — well, perhaps excepting San Geraldo whose English is, as you know, questionable. Carlos is an exceptional cook. (Anna, like me, is great at cleaning up.) He made one of his traditional winter specialties, cocido — a chickpea-based stew with meat and vegetables. It’s what we would call comfort food.

One of the friends, also named Anna (there were three Annas that day), is originally from Sweden. Good friends of hers were in Spain for the winter and they happened to be in Sevilla for a couple of days. They stopped by for dessert with two friends of theirs, also from Sweden. Since I couldn’t remember any of the Swedish words my friend Siri has taught me, I greeted the first man, Dino, with a Norwegian expression, “Hyggelig å treffe deg” (“Nice to meet you”). I said it using my best Norwegian accent, which sounds quite a bit like the Swedish Chef from The Muppets. Swedes and Norwegians tend to easily understand each other. Dino looked at me a bit strangely. It turns out Dino was born and raised in Italy.

Anna (the original Anna) decided this lunch was a good opportunity to consume all that remained of their Christmas goodies, including polvorones — a “powdery” cookie that’s traditionally made with animal fat, which means they may not be at all healthy but they’re delicious and they melt in your mouth. I, of course, was too full from lunch to have the polvorón I was offered. So I instead had two. There were walnuts. San Geraldo hates walnuts, and I rarely get to enjoy them. So, I enjoyed a couple. Then came the chocolates.

There was fudge — homemade. I’ve got a weakness for fudge and when it’s homemade, well one has to be polite. So I had a piece of fudge. Then came cute mini cups of chocolate of some kind… with sprinkles. At this point, I had no possible room. But Swedish Anna told me her 21-year-old daughter had made them and sent them along for us. What could I do but be polite? I was polite … twice. They were unbelievably good.

Then there was a wooden box of sweets called “yemas.” That means yolks and that’s what these looked like when you bit or cut into them. They’re one of many sweets made at the local convents for Christmas. The ingredients: Egg yolk and sugar. They melt in your mouth, too.

I needed the vino de naranja to complement the sugared orange rinds that were made by Carlos’s father from the oranges he grows in his garden.  The only thing sweeter than the desserts was the company. How lucky can you get?

Anna and Carlos have two of the greatest boys we know. They’re both very bright, charming, and funny. They’ve been learning English since they started school and they, sometimes, love to practice on us — as long as their parents aren’t listening. I tried to get a good photo of Anna with Luis (6) and Carlos (7). Carlos always poses politely for the camera. Luis tends to ham it up. Kind of sums up their personalities. 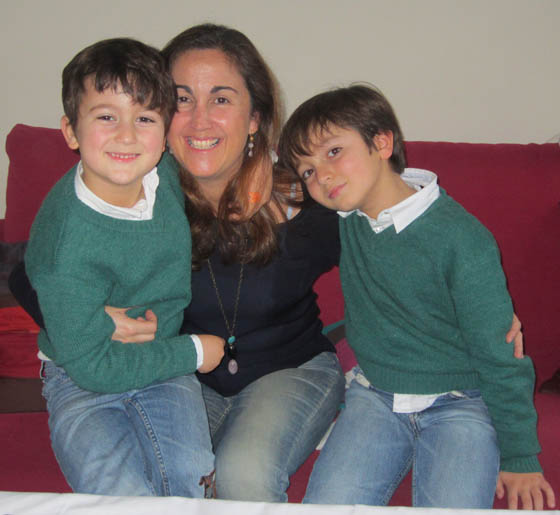 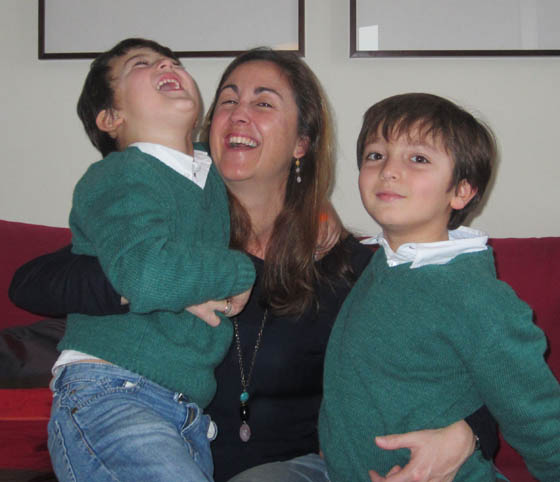 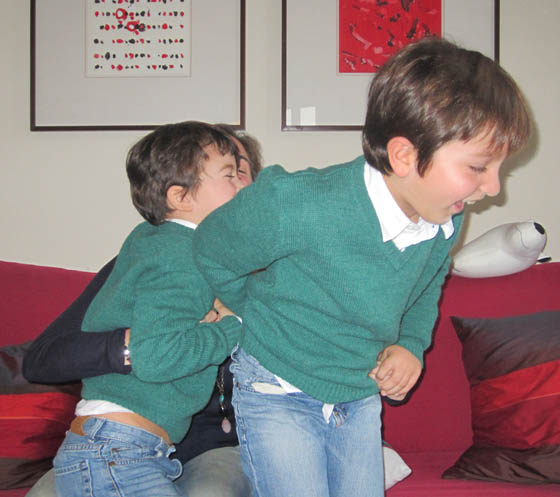