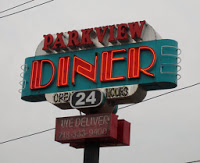 Having a meal out with The Dowager Duchess usually results in carrying home a doggy bag for a non-existent dog. The Duchess is a light eater and eating light is an impossibility at just about any Brooklyn diner (not to be confused with the brand-named “Brooklyn Diner” in Manhattan). A Brooklyn diner meal for one could easily serve three.

Our favorite nearby Brooklyn diner is the Parkview Diner on Cropsey Avenue. That’s where last week’s photo of the three of us was taken (click here). The Parkview Diner is also where you’ll find photos on the menu of the Coney Island Parachute Jump along with the sailors my mother and her friend Harriet “picked up” in 1946. (Click here for that shocking story from The Duchess’s past.)

My mother usually gets at least one meal at home out of what she can’t finish at a diner. But, she’s now in the habit of taking home things for Chucky (the Kid Brother), as well.

The Dowager Duchess doesn’t go anywhere without precision-folded plastic bags in her purse. If she notices there are crackers, bread sticks, or bread remaining in the bread basket, she says, “Give me that for Chucky.” Left-over French fries? “I’ll take those for Chucky.” Extra dinner napkins (the paper ones), “Chucky likes those. Pass them to me.” I asked The Duchess if Chucky would like the silverware. Her quick response, “He doesn’t need silverware.” (Then I got “the look.”)

Since San Geraldo never witnessed this kind of behavior during his childhood in South Dakota (it’s the norm in New York), he usually looks a bit embarrassed. The Duchess tries to ease his embarrassment by saying, “Well, it’s already on the table. They’re just going to throw it out anyway.”

On our flight to Dublin, we had lots of packaged items. I grabbed them all and said, “Save these for Chucky” (which would again have gotten me “the look” from the Dowager Duchess). Then, I ate them all. As they used to say on the Star-Kist Tuna commercials, “Sorry Charlie!”