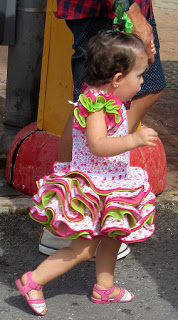 After a summer of never being quite sure where I was when I woke up in the morning, I am finally a little less confused.

We’re beginning to settle back into some sort of routine, getting used to the fact that daily emails and weekly Skypes with The Dowager Duchess are no longer a part of it.

One thing that makes it clear we’re back in Spain is the fact that, within two weeks of our return, there’s another fair in town.

This is the Annual Fiesta del Rosario, which commemorates the 1571 victory of a coalition of European Catholic maritime states (mostly financed by the Spanish Empire) in a major naval battle against the Ottoman Empire.

I have a feeling most contemporary celebrants have no idea. It’s just another excuse to get decked out. ride your horse to Fuengirola’s fairgrounds … and dance.

(Lots of photos. No captions. Click to enlarge and imagine your own stories.)