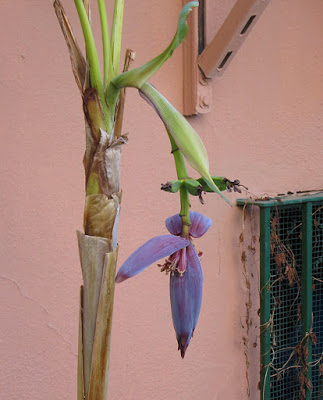 While the sun was still constantly shining — before these last few days of mostly cloudy, sometimes thunder and lightning, and a mix of light and heavy rain — I was on a walk on the beach when I spotted a sad-looking cluster of plants in a cement planter outside a chiringuito (beach café).

The tallest plant caught my attention because hanging from it was what I’m pretty sure is the flower that will produce a cluster of bananas.

It’s easy to get the real banana plant confused with the “giant white bird of paradise” or “wild banana” whose flowers look like the typical orange bird of paradise (except that they’re giant and white… which is probably where it got its name, don’t you think?).

Unlike the real banana plant, however, the giant white bird of paradise doesn’t bear edible fruit. So, once there’s fruit (i.e., bananas), I can easily tell it’s a real banana plant. I’m clever like that.

Anyway, as I mentioned earlier, I’m pretty sure that what I saw was a real banana plant. I’ll wait for the bananas and will let you know for certain — unless, of course, someone out there looks at my photos and can tell without waiting for bananas (or no bananas, as the case may be).

(Don’t forget to click the image for a bigger banana … or no banana.)

Time for a another song from Louis Prima…