ON OUR WAY home late Friday night we stumbled upon another Semana Santa (Easter) procession as two floats were being returned to their home at one of the local brotherhoods. There appeared to be a dance going on between the two, forward and back, up and down, until they were individually backed through the large gates. All was accompanied by music from the Spanish Legion. It was a nice surprise. If you’re interested in learning more about the Spanish Legion, do an online search. Beyond the talented band we saw, there’s an awful lot of eye candy. It makes me wonder what the entry requirements are. 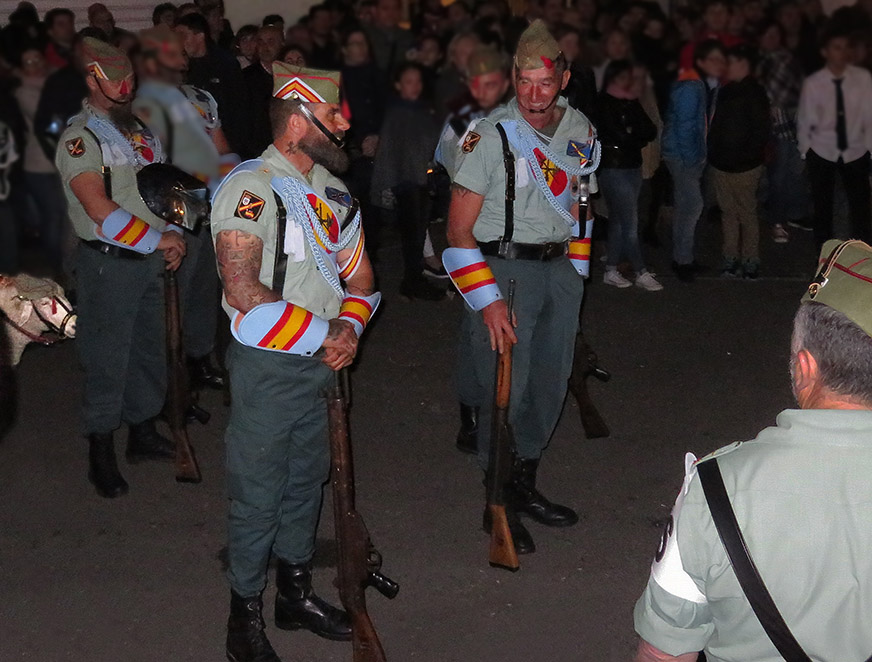 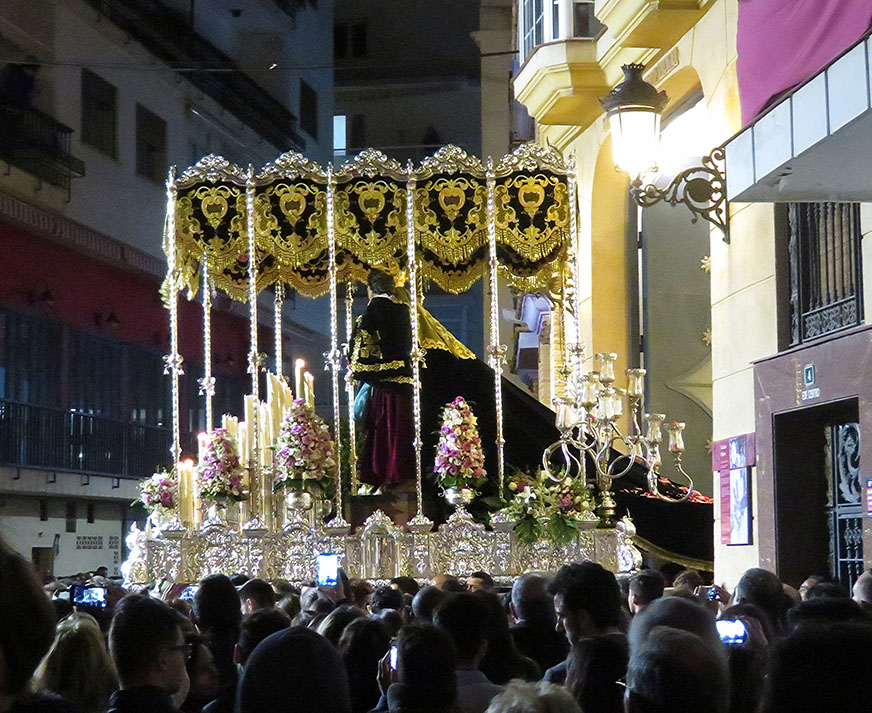 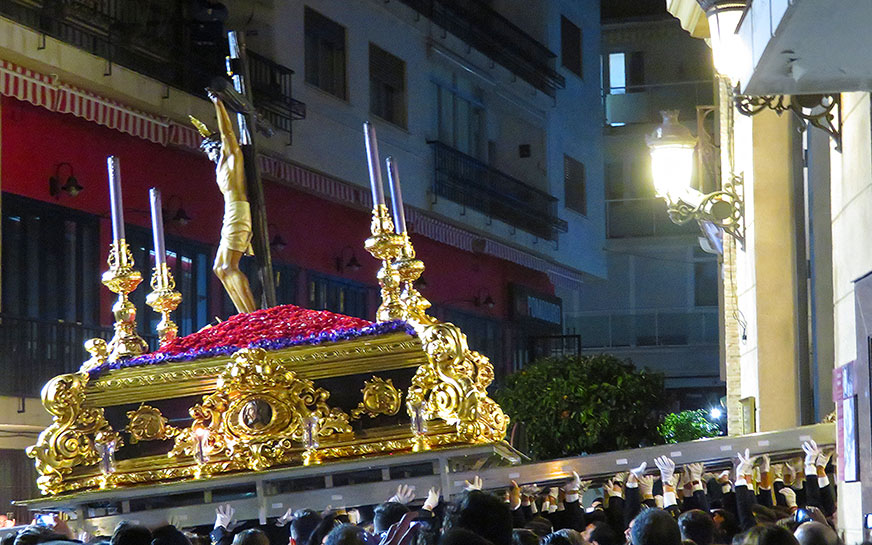 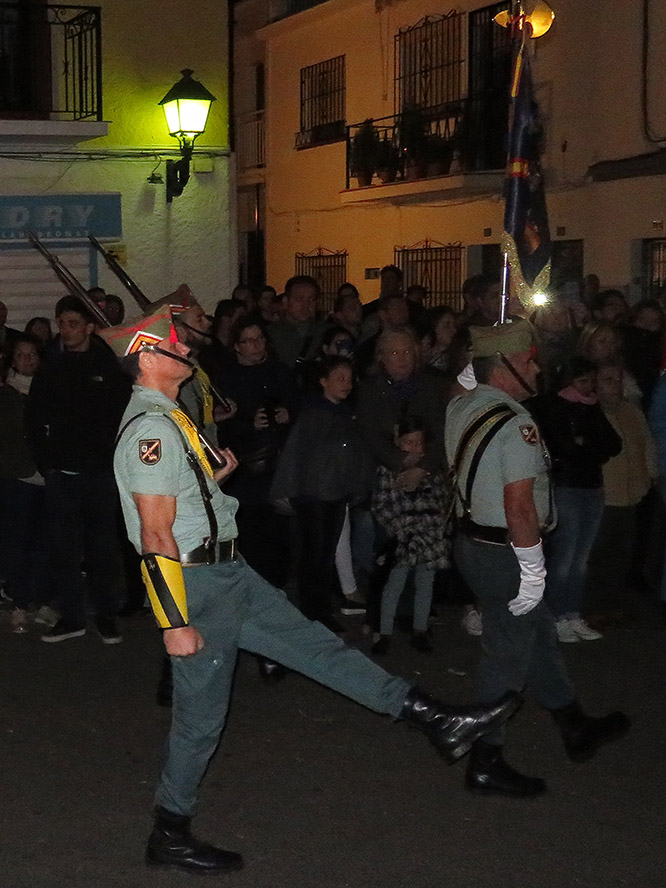 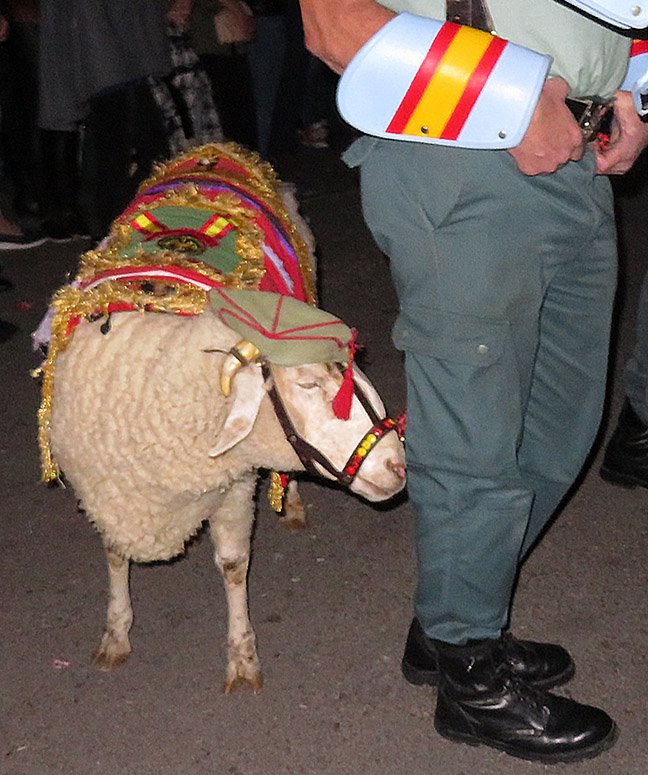 WHILE WALKING HOME from the orthodontist Tuesday, I came upon crowds of people, including a lot of children, on the streets near City Hall.

I thought, “Uf! School must be letting out.” But I realized it was already 7:30 in the evening.

As I continued, I saw that I had just missed an Easter Week procession. The band was dispersing, but the two statues were still there. Jesus appeared to be having a stand-off with Mother Mary. Maybe he had stayed out too late. As you can probably imagine, Mother won. She turned right and her son followed her home. 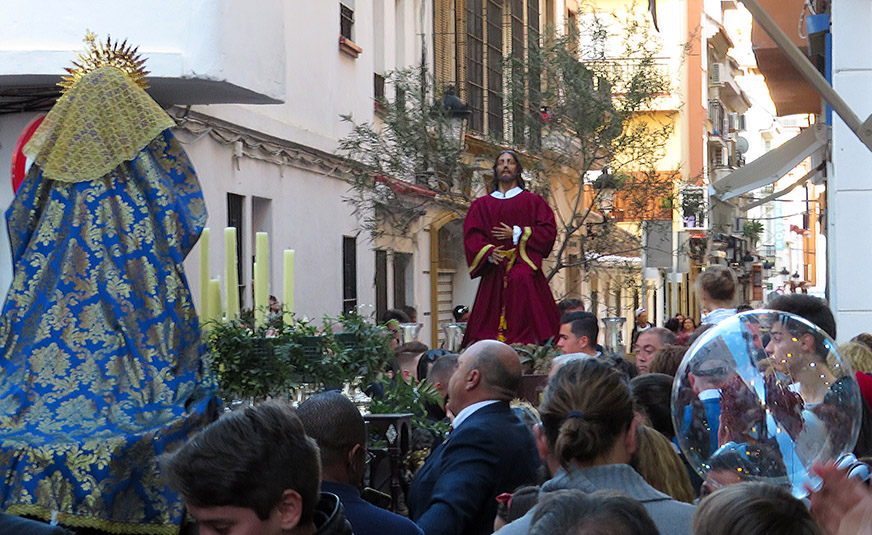 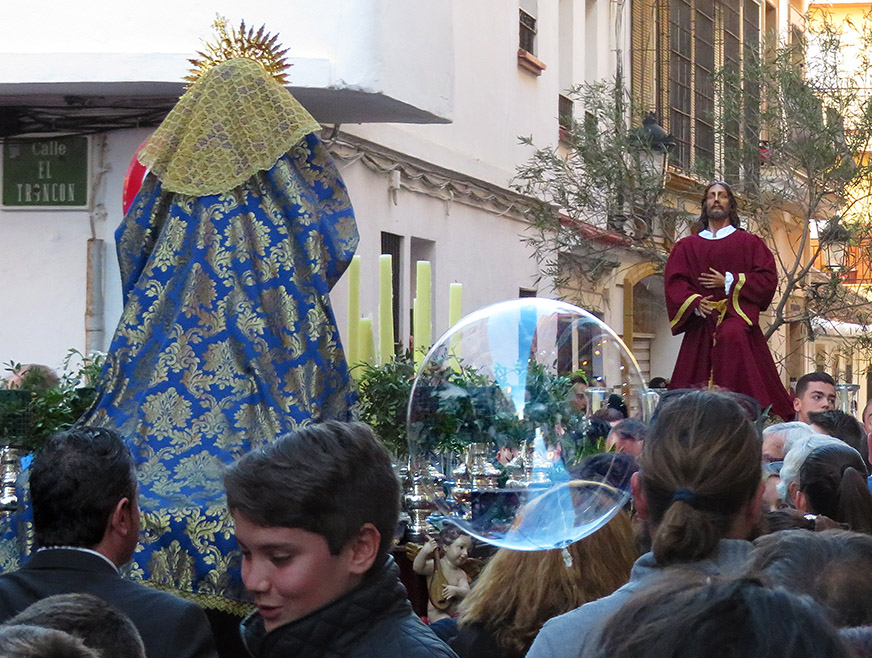 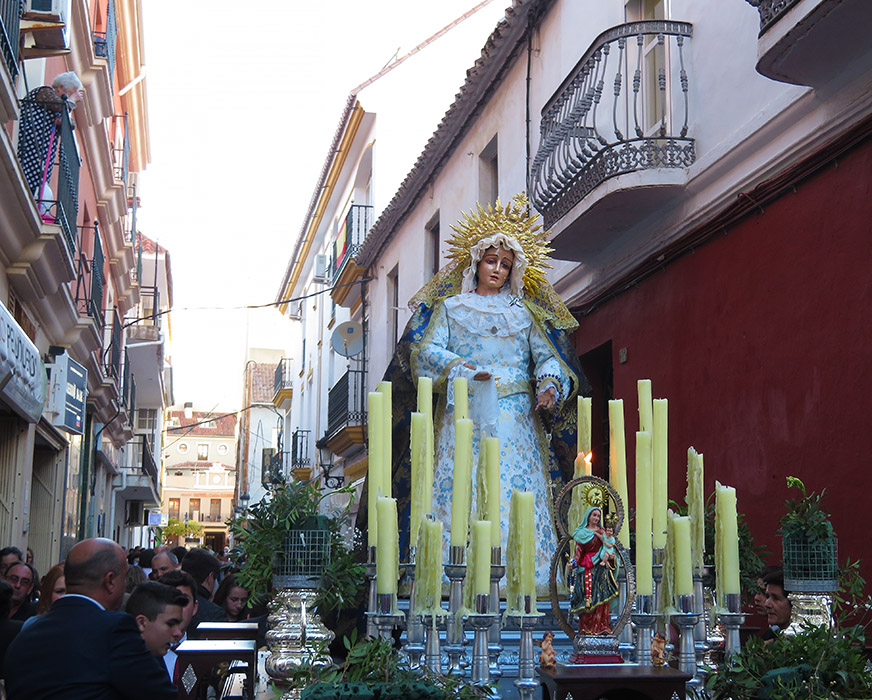 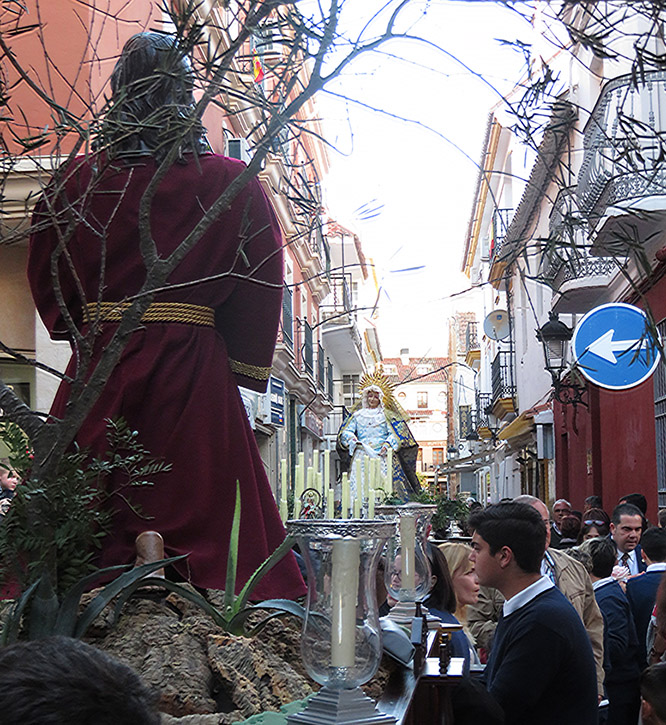 Friday morning, our neighbors stopped by to thank us again for the delicious torrijas made by San Geraldo. I thought I’d be kind and give them some more, but San Geraldo quickly said, “There are only two left.”

Without hesitation, (and very kindly) I told our neighbors, “You’re out of luck!”

San Geraldo made grilled ham and cheese sandwiches for lunch and placed the last of the torrijas on our plates. The sandwich was good but I only had eyes for my last torrija.

Today, San Geraldo went shopping. He came home with more special torrijas bread. (Torrijas can be made with “un-special” bread, but our friend The Goddess Elena says it’s better this way, and we always do whatever she says.)

San Geraldo cooked up his first-ever traditional Spanish torrijas in honor of Holy Week. Well, not really in honor of Holy Week but because they’re so good! The Goddess Elena, our dear friend, hasn’t had time yet to make them this year and we got tired of waiting. So San Geraldo asked Elena for her recipe and then took matters into his own hands. San Geraldo’s torrijas are perfect! (But I already knew that.) 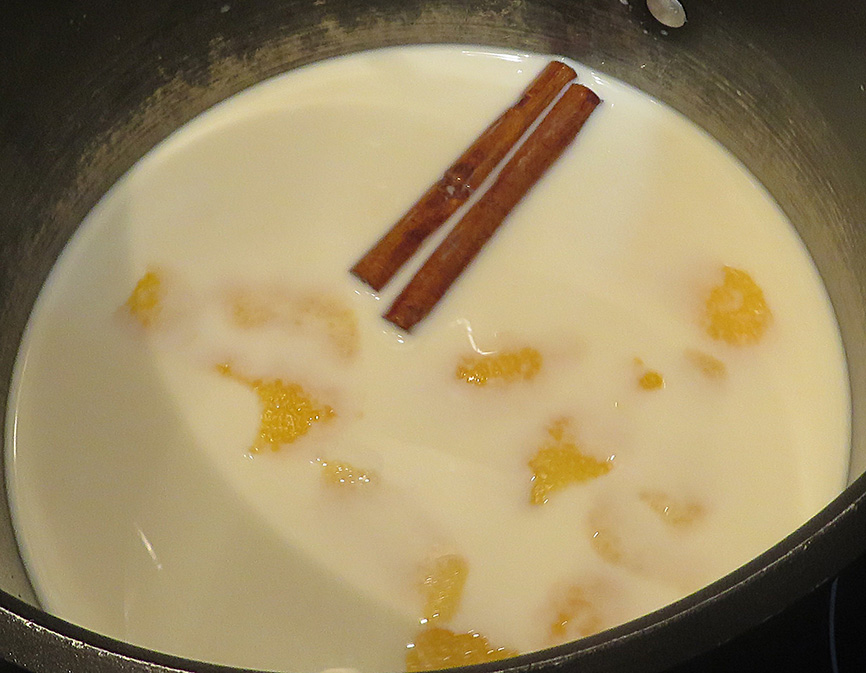 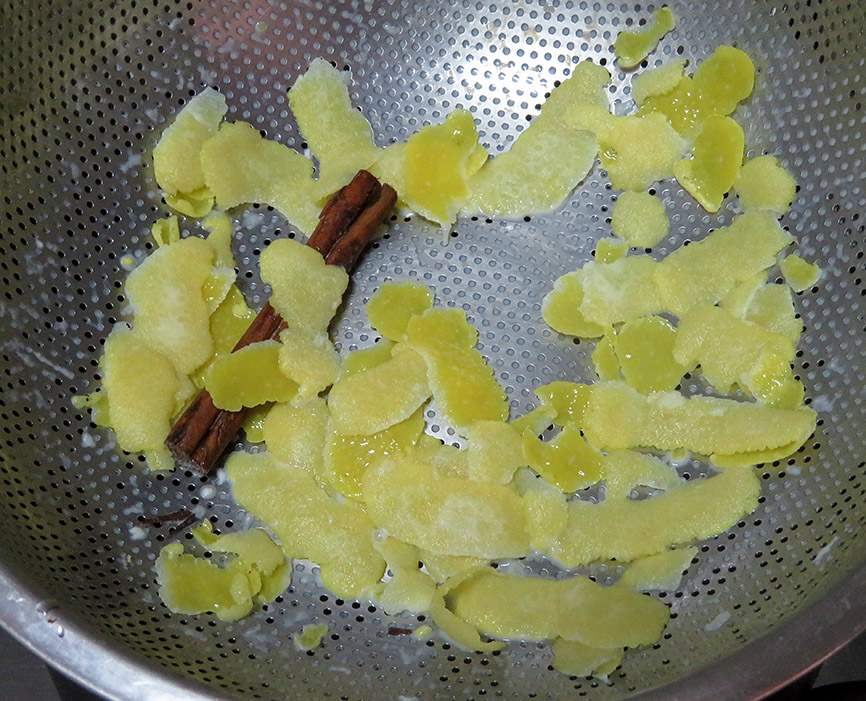 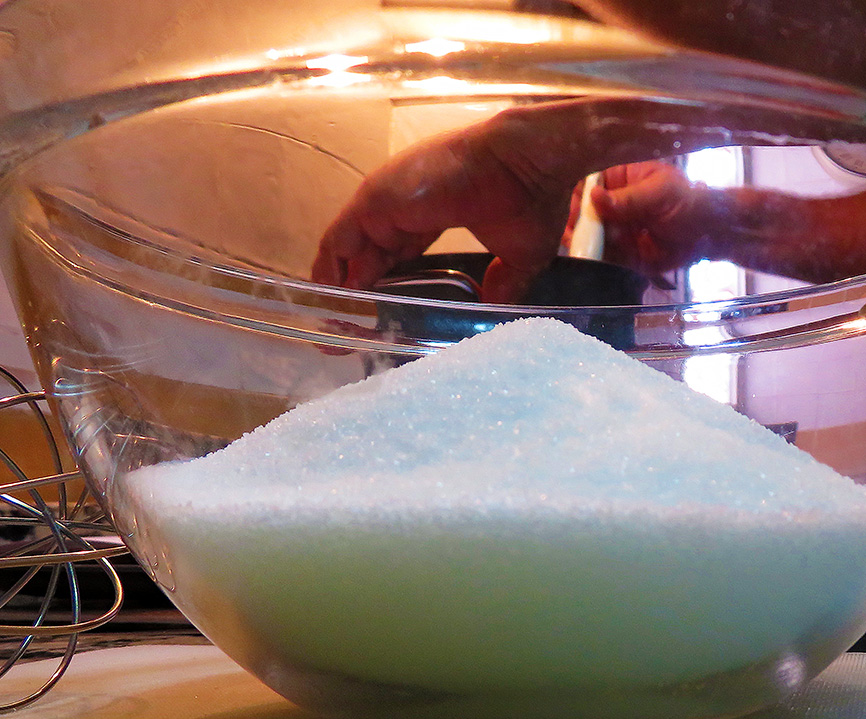 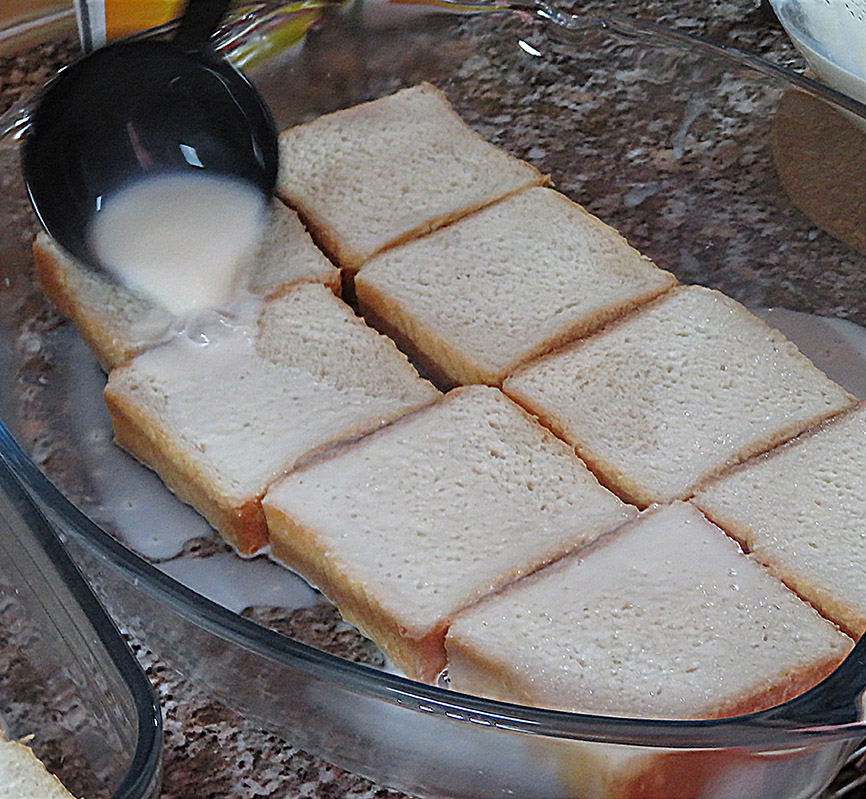 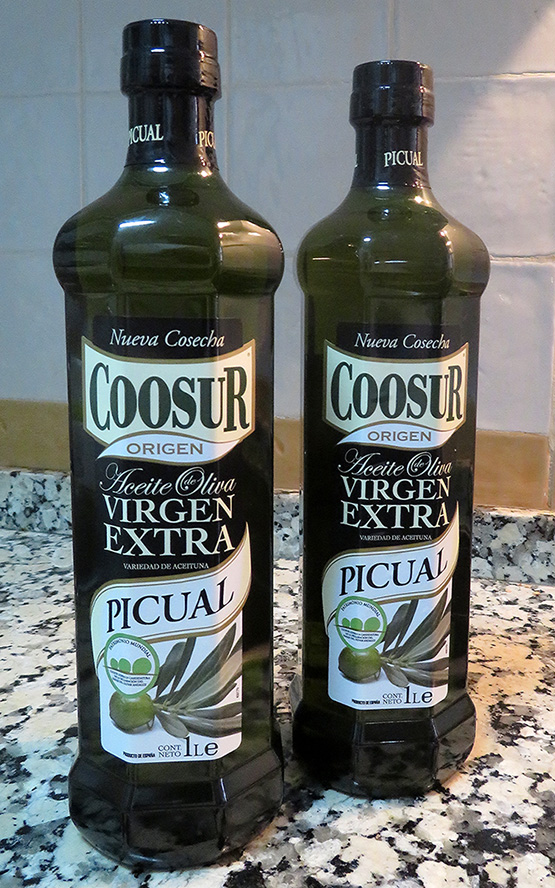 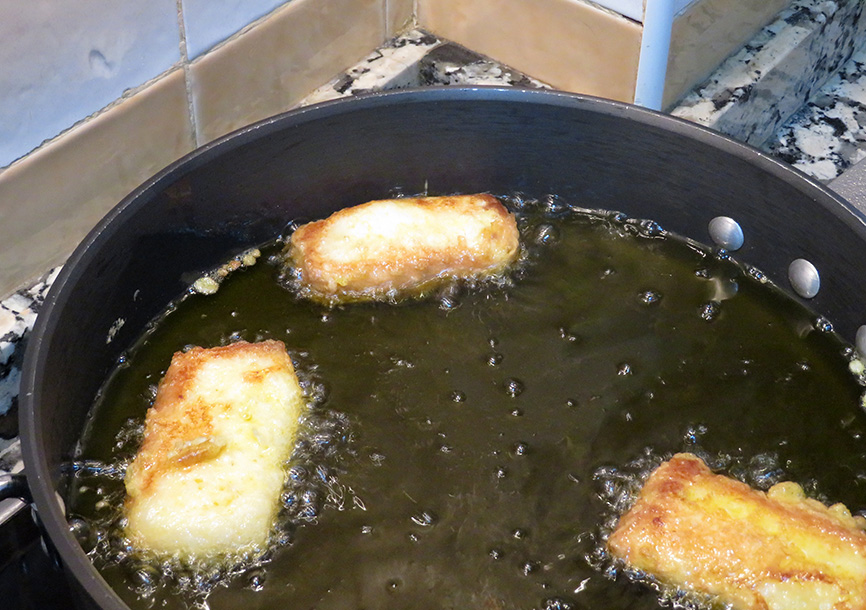 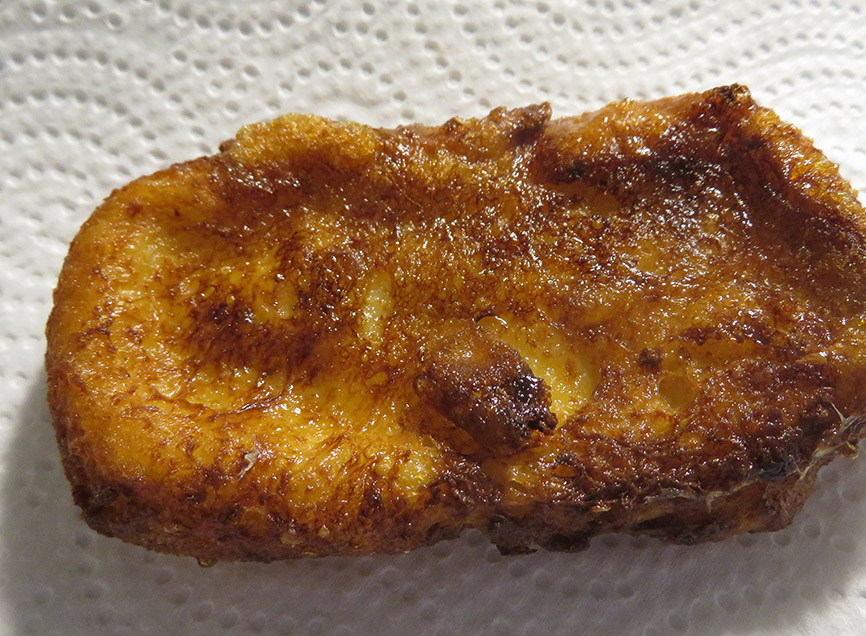 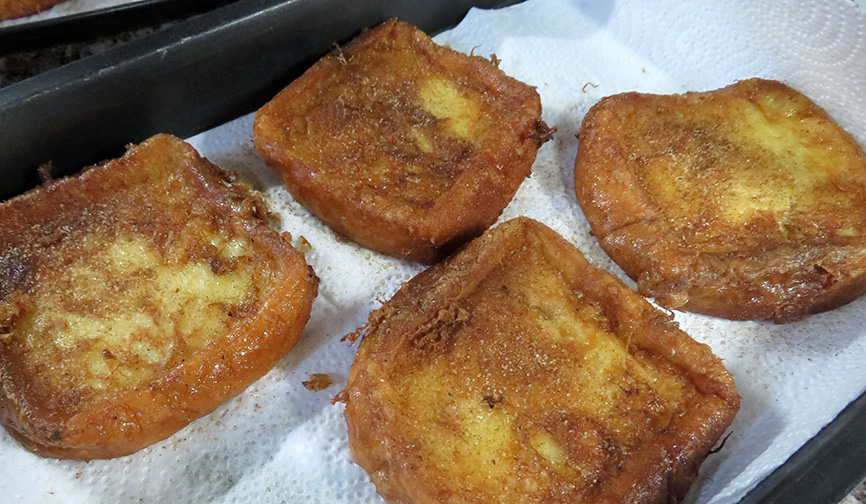 I went for a 7.25km (4.5-mile) walk Wednesday to one end of the Paseo and back (it’s become my short walk). A healthy walk is part of my daily routine. But yesterday it was especially needed to burn off the lemon merengue pie Chef Robbie insisted we try with our morning coffee.

San Geraldo arrived home a few minutes after I did. “I bought us a treat!” he said.

I saw bakery wrapping and thought, “Oh, crap. So much for my walk.”

But then he unwrapped the paper. And I thought, “SO glad I took that walk.”

The first time I had torrijas was during Semana Santa 2012 (Holy Week) in Sevilla. I bought them in a local bakery. They were good, but nothing to write home about — so I didn’t, and quickly forgot about them.

Last year, Elena made us some that were, as San Geraldo said, “to die for.” (Click here for Elena’s torrijas and a glimpse of the Easter Moose.)

This year’s bakery torrijas, smothered in honey, were sweet and delicious but nothing like Elena’s. And we still have Elena’s to look forward to (hint, hint).

Elena’s version consists of a thick slice of bread soaked in warm milk for an hour, and then dipped in egg batter and fried with olive oil before being sprinkled with cinnamon. The bread gets crusty on the outside and custard-like on the inside. Elena’s torrijas are out of this world.

The bread is often soaked overnight and wine can be used instead of milk. Traditional recipes call for the addition of honey, which The Goddess Elena doesn’t like. But we’re not complaining. (She doesn’t like raisins either, and calls them flies.)

In my opinion, if you only dip the bread in the batter, as some recipes suggest, instead of soaking it for an hour or more, the result is pretty much like American “French Toast.” The extended soaking changes the consistency of the bread to custard. So much better (again, in my opinion).