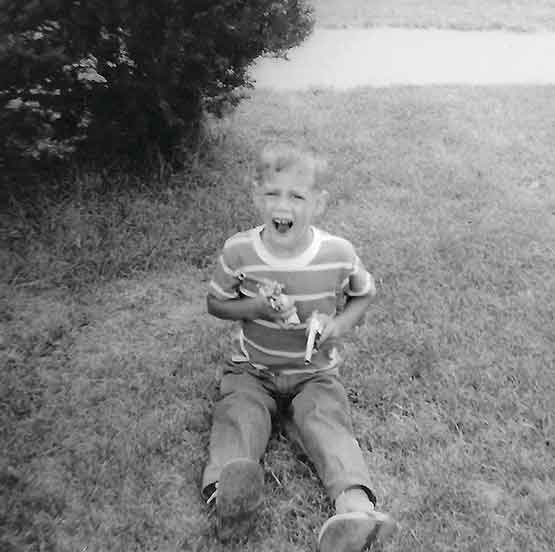 “YOU WOKE ME up! I was asleep!” barked The Kid Brother after San Geraldo and I telephoned in a rousing rendition of the Birthday Song.

“Sorry!” I said. “But we wanted to wish you a happy birthday.”

San Geraldo signed off with, “Happy Birthday, Chuck,” to which The Kid Brother muttered, “I know!”

I had my Excel spreadsheet already open and I added The Kid Brother’s bowling scores to the weekly report.

“Did you like our singing, Chuck? We’re talented, aren’t we?” I asked.

“A 2?!? Unbelievable!” I laughed. “A 2?!? … You know that money we put in your new bank account on Saturday? That’s your birthday present. How’s THAT for a big birthday present?”

“Pretty good,” he said before he went back to bed.

“Whadda YOU want?” he blurted when I phoned at 6:25. “I take my shower at 6:30!”
“You’re late!” he snaps, when I connect on Skype at 11:01 instead of 11:00.
If I connect at 10:59, he mutters, “You’re early!”
Sundays during spring/summer, he plays softball in Central Park. So he visits my mother Saturdays and they have lunch together.
Saturdays during fall/winter, he bowls in a league. So he visits my mother Sundays and they have lunch together.

Three mornings per week he drops off his laundry at a nearby fluff-and-fold. They originally told him it would be ready by 4. So that’s when he picks it up. Not 4:15. Not 5. Four o’clock.


San Geraldo and I catered an 80th birthday bash for The Dowager Duchess (eight years ago). We included The Kid Brother as our co-host. The evening before, he told me he couldn’t come to the party because, “I got softball Sunday, ya know!”

The Dowager Duchess told him when he was 13 years old that chocolate wasn’t good for his skin. He’s now 55 and still doesn’t eat chocolate. Unless it’s white chocolate, which apparently doesn’t count.

Our sister Dale died in 1981 in Sheffield, England, when The Kid Brother was 21. We and our parents went to the hospice to say our good-byes. It was such an awful shock to see his big sister that way that he has refused to make a hospital visit ever since. Just being around someone who’s ill makes him very nervous.
So, of course The Kid Brother wouldn’t visit the Dowager Duchess during the 7-1/2 weeks of her  hospital stay. I was pleased to be able to convince him to come to the apartment once she was home (before I came back to Spain). He only stayed briefly and then he and I went out for lunch. Having a stranger in the house (the home healthcare worker) threw him off.
Well, The Dowager Duchess is on her own again. After five weeks she, too, has had more than enough of a stranger in the house. So, now I’m trying to convince The Kid Brother that things are back to normal and he can return to his old routine.
I just have to break him of his new routine.
When I spoke with him Friday (to convince him to visit our mother on Saturday), he said, “Maybe in December.”
I have my work cut out for me. (But I’m hoping he’ll come around by this weekend.)
Meanwhile, I’m awfully pensive and unfocused lately. Maybe The Kid Brother’s routines wouldn’t be such a bad thing.
For some reason, I woke up with this song in my head…