I have closed up shop.  For good.  We are applying for retirement visas, so I need to retire.  I had, however, imagined myself selling ToldemArt (the business) for millions and retiring in style.  Instead, I will save some jewelry samples as souvenirs and mementos and I will donate the rest to charity.  This is my “How Not to Succeed in Business” post.

Although under-capitalized, ToldemArt was off to a rousing start in 2008.  Early in the year, I was working with a trendy retailer in L.A. who thought ToldemArt was the greatest idea she had seen.  She was affiliated and — to my eventual dismay — enamored with the Hollywood tabloid set and was convinced they’d all wear (and give to their mothers) inexpensive gold-plate enamel jewelry with fake gemstones.  (OK, the concept is unique — designs created using the letters of the words they illustrate — but it is what it is… good-quality, inexpensive jewelry; not something the tabloid princesses have been known to fancy.)  We finally had a parting of the ways after the mother of a tabloid-princess bride decided that the jewelry she loved a day earlier wasn’t expensive enough to remain in the gift bags for the bridesmaids the day of the wedding.  The mother was everything she was reputed to be in the tabloids.  My day job was giving me no pleasure.  My trendy retailer was giving me no pleasure.  Solid gold and real gemstones might have made all the difference, but that wasn’t a possibility.  Besides, my trendy retailer had already cost me enough money.

Later in 2008, I got my Good Luck Collection placed at MGM Grand and Bellagio with the potential of expanding to all MGM Mirage properties in Las Vegas.  The jewelry sold like hotcakes (not that I’ve ever sold a hotcake) for the first four weeks.  A solid future was “guaranteed.”  Then, the economy tanked.  Everything stopped selling.  No new orders could be placed.  Two months later, the corporate buyers left the corporation.  When the economy finally recovers in Las Vegas, we’ll have been living our Spanish adventure for a good long time. 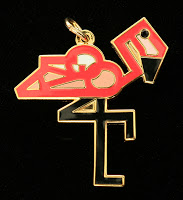 I spent part of 2009 creating The ToldemArt Zoo.  I had a a great time.  The doodling of designs remains a complete joy for me.  I sold the collection retail while developing wholesale opportunities.  Finally, in 2010, The Zoo was placed in two large venues, again with the potential of expanding to many properties — this time, around the country.  But, the economy continued to be uncooperative.  The corporate buyer remained confident, but the orders are not pouring in, and that visa application awaits.

I’m not finished having fun with my word-play designs.  They’ve been floating in my head for as long as I can remember.  I’ve kept a few sites at zazzle.com where I can see what the art looks like on a variety of products.  They are zazzle.com/ToldemArt, zazzle.com/BlockLetters, and Zazzle.com/TalkTrashy.

Oh… TalkTrashy.  I didn’t mention that I had a less wholesome line of designs.  Since my blog is G-rated, you’ll have to figure out these last two images for yourself… although I have included hints-like-bricks in the captions.  Wearing one or the other of these discreetly beneath my shirt and tie — during my last miserable year or two working for someone else — helped me make it through the worst days.  And looking around in meetings to see one or another of my colleagues wearing the same was definitely reassuring.

But now, no regrets about the many careers that never had enough meaning or the businesses that didn’t make me rich.  You have to move on.

4 thoughts on “I Have Not Failed”