We shipped a few pieces of furniture, some artwork, and two boxes of miscellaneous goods from my mother’s (The Dowager Duchess) New York apartment in late August. It went from there to Amsterdam to Madrid and finally arrived here in Fuengirola today.

New York and Madrid were great — well, except for the guy who incompetently packed the two boxes of miscellaneous goods. So, OK, Madrid was great.

The representative in Amsterdam sat on the shipment for nearly three months. As he explained to San Geraldo, when he finally responded, “It’s a long way from Amsterdam to Spain.”

But, it’s here. And it’s a joy to see my mother’s things in our house — especially my mother’s paintings, sculptures, and needlework.

Today’s photo is an embroidery The Dowager Duchess did more than 25 years ago. It’s 18 x 22 inches (46 x 56cm) and the work is so expert that, at first glance (and sometimes even after careful study), most people think it’s an oil painting.

As we unpack and start to get organized, we’re reminded of — and in awe of — my mother’s exceptional talent. (Click the image to be wowed.) 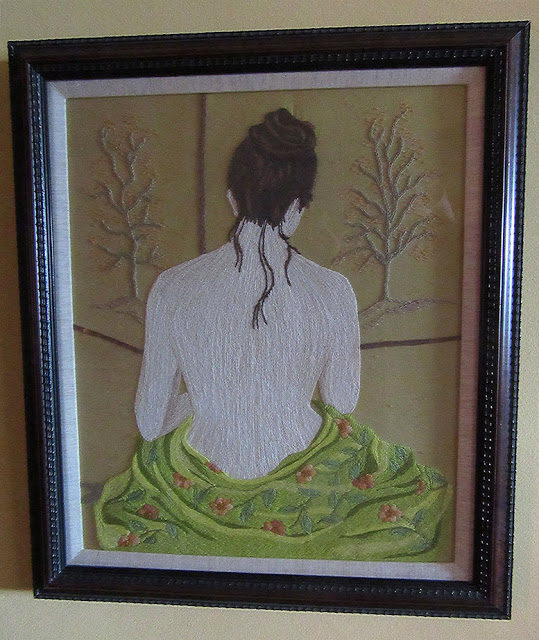 “So I pondered the point of art in this life…”