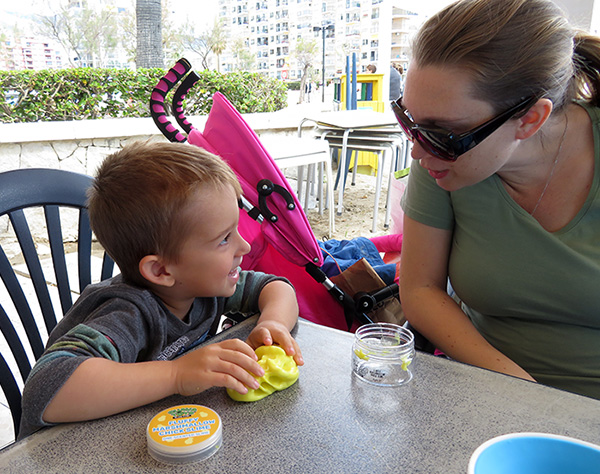 OUR FRIENDS PEDRO and Kathleen are both teachers. Kathleen hadn’t been working since giving birth to Luke more than three years ago, but she’s just begun teaching English online for an international company. As part of the interview process, she had to do demo lessons, which Luke watched her practice and then record. A few days later, Luke was in another room and Kathleen heard this:

Kathleen peaked around the corner and saw Luke sitting in front of the computer, holding a book, for his “student” to see. When she later told Pedro the story, he was so proud of his three-year-0ld son’s ability to grasp the concept of consonant sounds — until Kathleen told him how Luke had completed the lesson.

Camiseta is the Spanish word for T-shirt. Especially popular here are T-shirts displaying the names of American destinations, universities, and teams.

Most of the T-shirts are made in China. Printed in English. For a Spanish audience.

(Click the images. Some will get bigger. None will make more sense.)

Just the other day I passed someone wearing a T-shirt emblazoned with the name of that great American university, New York City State. Although I myself have never heard of it, I’m sure it must be huge. After all, someone made T-shirts.

One morning, while Judyshannonstreetwhat (click here for that post) was still here, we were having coffee downstairs at Cafe El Noventa when a little boy walked by with his mother. As you may remember, Judy is from Seattle, Washington, and so, apparently, was the little boy’s T-shirt.

My blogger buddie, Dianne from Yonks thought it would be fun to include me in a game of Blogger tag. She provided 10 questions for me to answer… (honestly, I think). This is an awful lot of pressure. The questions include some best/worst/favorite considerations and my mind is so changeable that I never know for sure what is my best/worst/favorite. Anyway, here goes:

1. What is your favorite holiday destination?
It used to be Palm Springs, California… until we moved there, opened a hotel in 2001, and lost our shirts. Since moving in July to Sevilla, I feel like I’m at a permanent holiday destination. Then again, my fantasy escape has always been an uncrowded beach, with nothing other than the crashing waves and the birds for background music.

2. If you were on death row, what would your last meal be?
I don’t eat when I’m stressed.

3. If you could invite anyone for dinner, living or dead, who would it be?
My big sister. I idolized her (and she me… we were a strange pair). She died 31 years ago just before I met San Geraldo. I would love to tell her all that’s happened since then. (She would love San Geraldo.)

4. If you had a time machine, where would you go?
I would turn my back and walk away from it. I don’t want to know the future. And I wouldn’t want to risk changing anything in the past — having no idea what impact that would have on the present or the future.

Or… to tomorrow to find out the winning lottery numbers and then come right back to today to buy the tickets. (When we lived in San Diego and San Geraldo traveled to China on business — putting him 18 hours ahead of me — I asked him to check the paper for the winning lottery numbers so I could buy that ticket. He wouldn’t do it. I’m not quite sure if he thought it would be dishonest or that it was simply idiotic… Well, I really am quite sure.)

5.  What is your earliest memory?
My memory works in strange ways.  I can hear a commercial jingle once and remember it the rest of my life. I can tell you what I was wearing the day I met San Geraldo in 1981 (Fiorucci jeans and a green ribbed T-shirt). But, I can’t remember where I put the toolbox.

Earliest memories are all from before the age of 1-1/2. The very rickety, old, dark-wood porch on the back of my parents’ apartment in Brooklyn and how it creaked and squeaked when anyone stepped onto it. Taking a bath with my sister (when I was under 1-1/2 and she was under 4), and my mother’s hand-mirror got knocked into the tub and cracked. Holding my mother’s hand while standing on a new street on Long Island seeing the foundation being poured for our new house.

7. Your best birthday gift?
When Jerry’s mother and his two sisters flew to San Diego and surprised me at the 40th birthday party Jerry was throwing (even though Jerry didn’t think to invite them from so far away). If the Dowager Duchess (my mother) had known, she would have done the same thing (so that was sad). Also, that same birthday when our friend Jim wrote a very funny and touching poem in my honor. (He wrote a very funny and racy poem, too. But, I’m keeping that one to myself.)

8. Your worst birthday gift?
I have no idea.

9. Your favorite flowers?
Daffodils. Before my sister got married and she was still living with my parents, when the first spring daffodils were being sold at the flower stalls outside the subway stations, she would pick up a bunch for my mother on her way home. They always make me think of her.

I think I was about 14 when I had my first real kiss. She was my girlfriend in 8th or 9th grade and then again in part of 10th grade. She and I hadn’t spoken since high school and reestablished contact about three years ago. She reads my blog. I have no idea where we were when we kissed. I know I wasn’t very good at it — thinking the harder I pressed my lips against hers, the better the kiss. First kiss with a man? Boston, when I was 26. I knew a little more by then. And I’m not telling either of their names. That’s all you get.