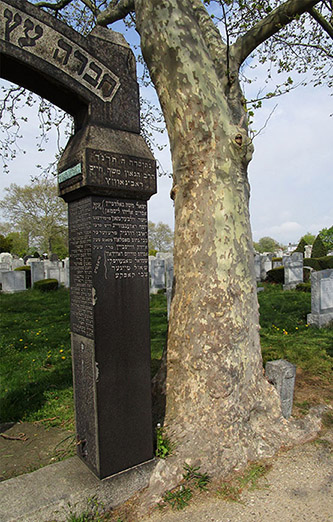 UNCLE AARON´S BRAIN WAS NO longer much for details. As he approached 80, his once-sharp memory had begun to come and go. He was constantly getting confused, missing connections, much like the trolley cars he used to drive around Brooklyn. Clanging merrily down the street one moment and stopped on the tracks, the overhead wire disconnected from the power source, the next.

So, each year in the five years since my father’s death in 1987, San Geraldo and I would drive down from Connecticut during the Jewish New Year to take My Mother the Dowager Duchess, and my Aunt Lilly and Uncle Aaron, to the cemetery on Long Island for their annual family visit. My father was buried next to my mother’s parents, who were just a few steps away from my grandmother’s parents. Not far from them were some of their brothers and sisters, relatives I only knew from their headstones, their passing recorded long before my birth.

My large extended family had surprised me by readily accepting the fact that I was gay. Perhaps it was because Dale, the center of my universe for so many years, had just died of cancer at the time I came out (no coincidence that I came out then; it didn’t seem to matter anymore). Maybe the fact that San Geraldo had a Yankee blue-blood pedigree made it easier to accept. The name did carry some weight, and his charm and good looks sealed the deal. Besides, they quickly learned how kind he was, caring about my father through his illness and death, becoming another brother to Chucky, another son to The Dowager Duchess.

Each year, we would follow Uncle Aaron’s directions down cemetery lanes to visit the family. We left the Duchess’s apartment in Brooklyn at 10:00 Friday morning to pick up Aunt Lilly and Uncle Aaron who lived just a few minutes away. They were waiting for us at the side entrance to their building, another 25-story brick tower bearing a strong resemblance to my mother’s.

Aunt Lilly’s spirit hadn’t weakened as she settled solidly into her 70s, but her knees had. This year, SG had the inspiration to bring along a step stool to make it easier for Lilly to get in and out of our SUV. Since giving birth to her first daughter some 50 years earlier and her second 4 years later, Aunt Lilly had never reclaimed the slender and shapely figure of her youth. She always made attempts. At family gatherings, instead of having an entire piece of cake with her coffee, she would only take a sliver. But then, another sliver. And still another sliver. “It’s only a sliver,” she would say. I would never have described Aunt Lilly as fat, though. More like comfortable. And Uncle Aaron was always comfortable, as well. For me, they were both exactly as they were supposed to be.

Before their 50th wedding anniversary, Aunt Lilly finally stopped dying her hair shoe-polish black. It was now snow-white, just as her mother’s had been, and her eyes were a silvery gray, just like her father’s. Uncle Aaron’s hair had changed only slightly in my 38 years. The golden brown horse shoe that ringed his head when he taught me to ride a bike was now a brown and white horse shoe. And he still had the carefully trimmed, movie-star mustache he had adopted in the 1940s.

After setting out the green enameled step stool, to which Lilly laughingly exclaimed, “Oy, Jerry. A gezunt dir in pupik!,” and helping Aunt Lilly up into the front seat of the Isuzu Trooper (if she sat in back she got car sick), I climbed in back with my mother and Uncle Aaron, and we were on our way.

“Hadayadoodle, boys?” piped Aaron. “Where are we going?”

“To the cemetery,” Lilly responded with a sigh. “Oy, Aaron.” And to us, she explained, “I must have told him a thousand times where we’re going. He’s becoming such a farshtopterkop.”

“It means his head’s stopped up, Jerry,” the Duchess explained and then asked, “Do you know what Lilly said to you before? It meant, ‘Good health, to your belly button.’”

Lilly, being the eldest of the seven siblings, did not learn English until the age of 5, when she started school on the Lower East Side of NYC. She was shocked to discover that the language her parents and the neighbors spoke, Yiddish, was not the language everyone else in New York spoke. She returned from her first day at school furious with her parents and told her mother they were no longer allowed to speak Yiddish at home. Only English. Lilly grew to speak beautiful, extravagant, and sophisticated English. The most elegant in the family. But, as she grew older, she seemed to revert more and more to her Yiddish roots.

There was surprisingly little traffic on the Belt Parkway that perfect spring morning and in less than 20 minutes we had crossed into Long Island. “Here’s your exit, Jerry,” I directed, knowing what would ensue.

“This isn’t the exit,” chimed the Duchess.

“Yes, it is,” I insisted, as SG signaled and exited the Belt Parkway. “Go left at the stop sign.”

“I thought this wasn’t the exit.” I muttered. And then added, attempting to be more kind, “I’m sure it’s left.”

“Aaron, do we go left or right here?” asked Lilly.

“Where are we going?”

“Oy, Aaron. Where are we going. To the cemetery!” she wailed.

A few minutes later we reached the ornate, iron gates of the Beth David Cemetery and I breathed a sigh of relief. We drove onto the grounds of the orthodox cemetery and made our first stop to visit my grandparents and my father. While my mother and Lilly read the prayers, Jerry and I collected small stones for everyone to leave on the graves to show we had visited. For my father, I found a small gray stone from me and a beautiful smooth white one from Dale (I don’t think you’re actually supposed to leave a stone on behalf of someone who’s dead, but I do it to this day).

After making the usual rounds, we ended with Uncle Aaron’s parents. He could no longer remember where they were buried, so Jerry and I reviewed the map (a map on which Aaron had carefully marked the location of each new resident over the years) to determine the section to search. We then walked the tightly packed rows of new and old marble gravestones until we found them.

Aaron opened the prayer book and read aloud. Jerry and I stood respectfully nearby, while my mother and Lilly stood on his other side.

“Extolled and hallowed be the name of God …” he began.

“Mimi, I went to Top Tomato yesterday.” “Oh, Lilly, I wish I had known. I need cucumbers.“

“… and which He governs according to His righteous will …”

“You should have called me. I got the most gorgeous strawberries. Ay-yay-yay. From heaven.”

“Did you notice if they … Oh, Lilly, the bialys! I could kick myself.” “What?” Lilly asked. “What a memory I have. Schlucker’s was having a sale on bagels and bialys. I know how much Aaron loves bialys, so I bought you a dozen and put them in the freezer. I was going to bring them upstairs when we picked you up today.”

“… May they find grace and mercy before the Lord …”

“All right. So they’ll stay in your freezer another day. We’re not going anywhere.” “I’m getting so forgetful in my old age.”

“… and the rest of the righteous males and females that are in Paradise; and let us say, …”

“You? When were you not forgetful? And don’t talk to me about old. Oy, Aaron. What is he reading?”

“… and grandmothers, my uncles and aunts, my …”

“… whether paternal or maternal, who …”

“Aaron!” Lilly moaned, mostly to us. And then she commanded, “OK, Aaron. Genug iz ge’nug. Enough is enough. I want to visit Matilda sometime this century.”

As she climbed back into the car, Lilly asked SG, “You don’t mind driving to Matilda’s, do you? She’s just home from her surgery. And we’re so close. But, I don’t want to call her first. She’s such a baleboste [perfect homemaker]. Even sick, she’ll want to serve lunch.”

“It’s fine with me,” said Jerry, but then added knowingly, “As long as someone can tell me how to get there.”

“Sure, we can get there,” the Duchess insisted. “We’re very close.”

“Matilda? She lives close to here,” he commented.

He thought for a moment and then said, “No.”

SG sighed as we headed for the gates.

“What are we going to do with all those plots?” asked the Duchess. “Poppa bought 16, didn’t he?” commented Lilly. “Let’s see, there’s Mama and Poppa. And Davie. Aaron and I have our own through the Jewish Center. Mimi, you’ll use the one next to Davie. And you need one for Chucky.” “That’s five,” I offered. “Silvie needs four,” continued Lilly. “Nine,” I added. “I think Solly and Milly have their own. I don’t know what Matilda’s doing. Maybe she and Paul will use two. Elaine and Hank?” the Duchess wondered aloud.

“Elaine and Hank! Ikh zol azoy visn fun tsores!” proclaimed Lilly. Jerry looked to me for a translation. I had no idea. So, I said, “I have no idea.” “You understood that?” beamed the Duchess proudly. “Understood what?” “What Lilly said, ‘I have no idea.’ Or, literally, it means, ‘I should know as little about trouble’ — as I know about what Elaine and Hank will do.” “No,” I said, “I really had no idea.” “Wait!” Lilly boomed. “Mitchell and Jerry can use two!”

There was a stunned silence in the car. SG and I smiled. After a moment, I responded to Lilly’s pronouncement, “Well, I don’t know about that, Aunt Lilly. Do you think the cemetery management would allow it?”

“What’s to allow?” she demanded imperiously.

“Well,” I looked again at SG, who was trying not to laugh, as was I. “I mean … well… for one thing … Jerry’s not Jewish.” To which Lilly haughtily proclaimed, “Who’s going to tell? I’m certainly not going to tell!”

And, feeling loved and so fortunate (although there was no way we’d have ourselves buried in that cemetery), we headed back through the gates and into the wilds of suburbia. In search of Aunt Matilda.