I’m finally getting out and about again… a bit. So, this morning San Geraldo had the pleasure of my company when he went out for coffee. We went to La Esquinita. Nestor (the bartender) said in Spanish, “Good morning,” and then to San Geraldo, “The usual? Toast with butter and marmalade?”

Obviously, he had San Geraldo confused with someone else. The usual for us is simply cafe con leche. San Geraldo would never undo his healthy at-home breakfast by having a tostada, butter, and marmalade.

I began to say, “no,” when I looked in San Geraldo’s direction. The guilt was written all over his face. I indicated to Nestor that San Geraldo had just been busted. He laughed, apologised to San Geraldo for letting the cat out of the bag, and then prepared the tostada.

In Spain, a tostada (which simply means “toast”) is usually a loaf of bread sliced length-wise and then topped with something. My favourite is Iberian ham, olive oil, and a traditional tomato/garlic spread. San Geraldo’s favourite (that he apparently had any day he went to La Esquinita without me) is butter and marmalade.

Marina (click here) then asked if we had ever had manteca colorá. We hadn’t.

“It’s delicious and very Andalusian,” she said as she pointed to my iPad and I looked it up. 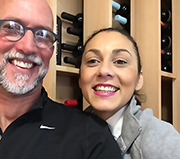 Well, “manteca” is “lard.” Manteca colorá (short for colorada) is “red lard,” which is prepared by adding spices like bay leaf, oregano, and paprika and then cooking it with finely chopped pieces of pork. Marina brought us a bowl and then toasted some [more] bread.

It’s popular as a breakfast dish. I had a taste and thought it was delicious. San Geraldo liked it, but didn’t find it very appetising for breakfast.

The last time we were together at La Esquinita was shortly after I had written my blog post about Marina (and not taking Spanish lessons from her). When we arrived that next time, she ran out the door, returning a few minutes later with a beautiful poinsettia with a hand-written note attached. She placed it on our table, gave me a kiss on each cheek, and ran off. She made my day (again).