YESTERDAY WAS ALL about the virgin. Today? There will be fireworks!
Make ’em go, “Aah! Aah! Aah!”

San Geraldo’s mother, Alice, had a dear friend named Sharon. Sharon was not a cook. Sharon was so much not a cook that I in comparison am Julia Child.

Sharon had Froot Loops for breakfast every morning. She called it her three servings of fruit.

I knew it was really only three servings of “froot.”

Speaking of fruit servings, downstairs at BarBoru, Chef Robbie likes us to try out everything he bakes. It kind of, almost, defeats the purpose of my long walks. Or maybe it makes my long walks all the more important.

I’ve told Robbie he can’t keep doing this to us. Sometimes he listens. But sometimes his baked goods include fruit and he explains that it’s important to have several servings per day.

Having lived here in Fuengirola for more than 4 years, I recognize many of the people I see on my walks around town. One man always stands out when I’m on the Paseo (the boulevard that runs for miles alongside the beach). I have never yet seen this man without a book in his hands. I’ve always thought it’s great that he’s out walking in the fresh air but I’ve been concerned about his poor posture and lack of natural motion caused by his reading (as if it’s any of my business). 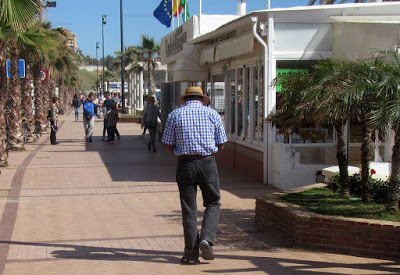 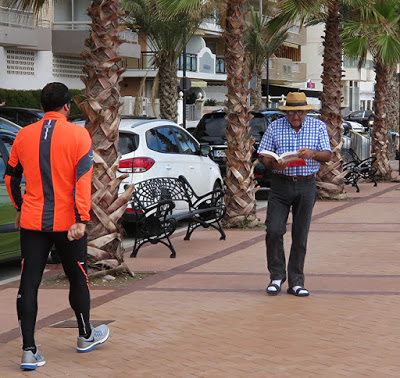 I’ve wondered what books keep him so absorbed. Obviously some kind of beach reading. But the books always look like workbooks or user’s manuals. Way too big for “Fifty Shades of Grey.”

Sunday, I managed to catch a glimpse of the cover of his current book. Let’s call it a murder mystery — because I know reading it would kill me.

I got a [big] bang out of my discovery…

When it comes to living with my clinical depression, mornings are usually my most challenging time. I tend to avoid an afternoon siesta because waking up from one is like experiencing morning all over again.

After a few nights of mediocre sleep this week, I couldn’t avoid a siesta Friday afternoon.

Less than an hour later, I was having another “morning.” As I lay in bed with my eyes closed trying to talk myself into again facing the day, San Geraldo came running in from the terrace.

“I’m sorry to wake you,” he rushed, “But you have to see the rainbow.”

Thanks to San Geraldo, I was able to wake up where the clouds were far behind me.

When all the world is a hopeless jumble…

Today ends Fuengirola’s annual restaurant event called “La Cazuela de la Abuela,” which means “Grandma’s Casserole.” Sixty-three restaurants participated offering their own special tapa-size casserole. All I needed to do was sample five and I could then vote for the best, and get entered in a great prize drawing. Except for sampling Meson Salvador’s entry, we missed the rest of the competition. But it doesn’t really matter because, in my humble opinion, Meson Salvador is always the best at everything anyway.

On the subject of abuelas and casseroles, my paternal grandmother died when I was very young. All I remember was her coaxing me out from behind my mother’s back by giving me candies from a cut glass bowl — raspberry hard candies with liquid centers. I, therefore, loved her.

My maternal grandmother was an amazing cook, but I don’t remember a single casserole.

Beyond the exceptional food and atmosphere, what makes Meson Salvador the best in the world is the staff. They call us “family” and they mean it. After a recent meal, Adrián brought us our complementary chupitos (shots of liquor). They serve “Pionono,” similar to Bailey’s Irish Cream only a whole lot better.

Since San Geraldo rarely drinks alcohol, Adrián brought him something non-alcoholic, a blackberry (mora) beverage. It’s what they serve to children. San Geraldo made a face when he tasted it, so Adrián got a straw and helped him drink it.