San Geraldo couldn’t stand to be out-done [by me] in the kitchen (see previous post), so he made a tremendous effort with his Christmas goodies. I do have to give him credit.

In addition to the best brownies I’ve ever had (every time he makes them), San Geraldo also baked his shortbread lemon-raspberry bars.

I’d ask him to marry me if we weren’t already married.

We brought the treats to Tynan and Elena’s on Christmas Eve. Other than those two “postres,” it was a traditional Spanish Christmas dinner, and incredible. Elena knows how to host a feast and make it look casual and easy. And her sister Isabel makes the best croquettes (croquetas) I have ever tasted.

The first Spanish Christmas song I learned our first year in Spain (click here for a visit to our first Christmas in Sevilla, 2011). There are many different versions, but I love the lyrics of this one… (translation at bottom). 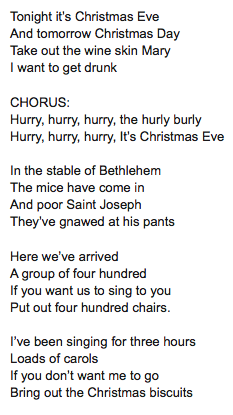