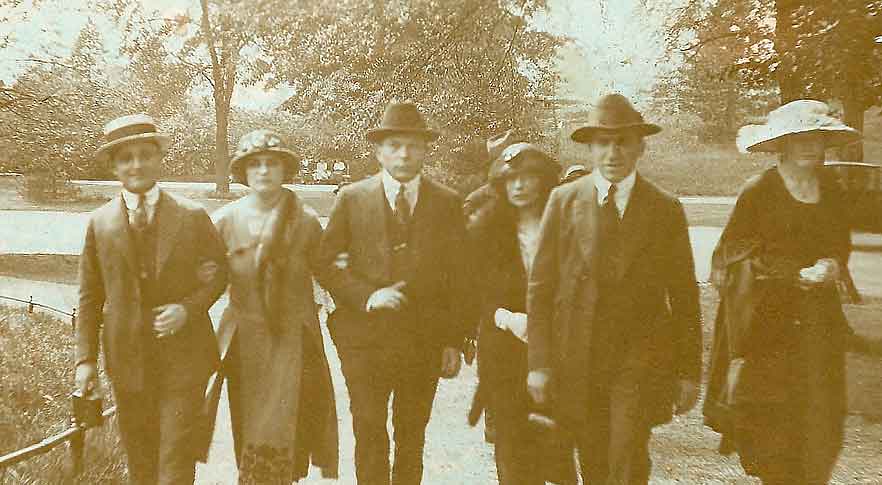 Our friend Tynan says I sometimes sound like a New York gangster. I can put it on but I never thought it was my normal way of speaking. Tynan can be very astute, but he’s also from Chesterfield, England, where they say things like “Orate?” which means “How are you doing?” So, when he says I speak like a New York gangster, I’m tempted to say “Geroff wi yer” (“I don’t believe you”)! But I recently scanned some more photos of my paternal grandparents and, I don’t know, maybe there is something of the New York gangster in me after all. The top photo shows my grandparents at left with some of their gangster friends.

I’ve been told by Tynan that I put the letter “U” where it doesn’t belong. He says that’s what makes it obvious I’m originally from [the City of] New York.

Once hearing Tynan say it (and Elena confirm it), I realised they were right. I think it’s a variation on what I grew up hearing and saying. “Your” would probably have sounded more like “yoo-ah.” All I seem to have done over the years is add an “r” to the end of that.

The only reason Tynan even brought it up, however, was because we were once again making fun of his Chesterfield, Derbyshire accent.

Tynan was telling us about fast-food restaurants arriving in his part of England in the 1970s. He mentioned McDonald’s, of course. But then he mentioned an American chain we had never heard of.

“Along came Peetsaroot,” he said.

“Come on then, surely you know Peetsaroot!” he snorted.

San Geraldo and I looked at Elena and she, although from Bilbao and speaking English as her second language, carefully enunciated for us, “Pizza Hut.”

Tynan was indignant. “Well, that’s what I bloody said!”

No matter how many times we repeated it our way, he would say it his way and insist it was the same thing.

So that’s when Tynan finally sniped, “By the way you make excessive use of the letter ‘U’; I’ve always just been too polite to mention it!”

After that bitter revelation, I decided to work on improving my pronunciation. However, Tynan said I shouldn’t. “Don’t do that,” he insisted. “I like it really. It makes you sound like a New York gangster. You know, like somebody from ‘Goodfellas.’ “