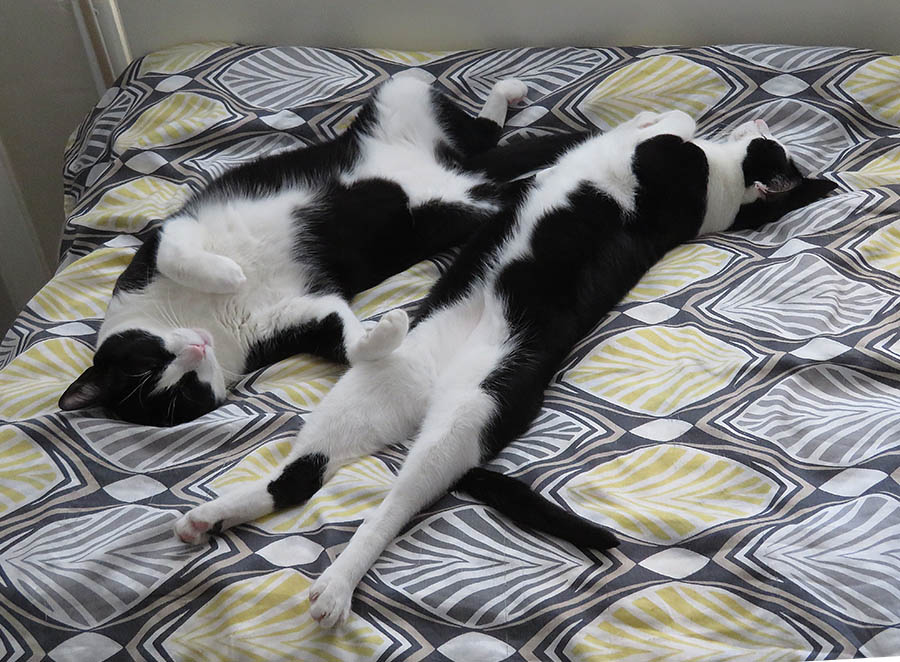 The felines at our house are in fine fettle. Isabel, who calls herself their godmother, house-sat and spoiled them rotten (something we never do). So although they were elated when we returned home nearly two weeks ago, they were content, loved, and well-fed while we were gone. Dudo didn’t even give us a moment of attitude and they’ve both been… well, let’s just say they’ve been very ‘atttentive.’

So, I was sitting on the toilet Friday morning. Yes, that really is how this story begins.

So, I was sitting on the toilet and Dudo decided, as always, it was a perfect opportunity for us to spend some time together. First, he forcefully pushed the door open with his front paws. He checked to make sure I wasn’t getting into the shower and then ran for a toy. (The usual routine.)

I threw the toy. He fetched it. I threw it again. He fetched it again. The third time, he returned with a long knotted-up string. We had a tug-of-war. I threw it. He fetched it. He tired of that and then raised up on his hind legs to head-butt my thigh. I took the hint and stroked and petted him. He clearly wanted to hop up on my lap. That was not about to happen.

I stopped responding to his head butts, assuming he’d leave me in peace.

Annoyed by my lack of attention, Dudo bit me on the ass! Well, more precisely, he gave me a love bite (with his sharp little teeth) on the upper thigh.

The message: “Don’t ignore me, goddammit!”

I of course gave him a stern lecture. He apologised.

Show me your teeth…