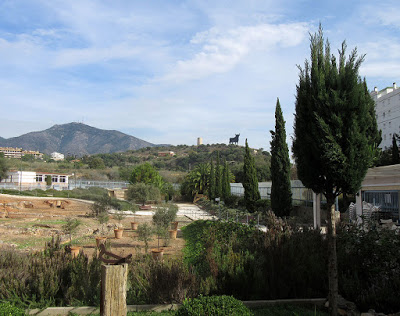 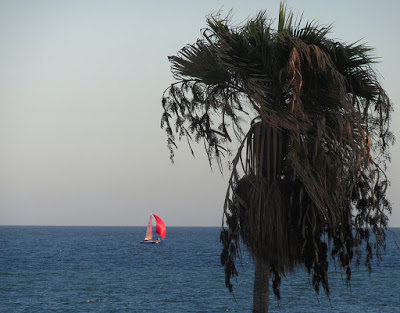 If you think Matt and Lindy are soft touches when it comes to cats in need (yesterday’s post), you should meet Lindy’s parents! They have a farm outside Pierre and have both farm and house cats. I can’t remember how many exactly — perhaps 15 inside the cool and stylish house and that many (or maybe 50, I get those numbers confused) on the farm. And, yes, they all have names.

If we lived closer, we probably would have begged to take a couple home with us!

(Click the images for a closer look. Go on. I know you can’t resist.) 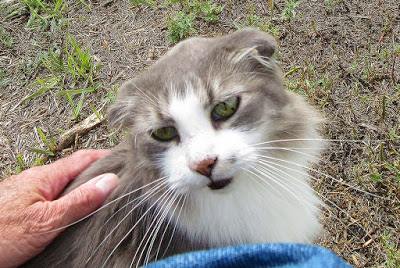 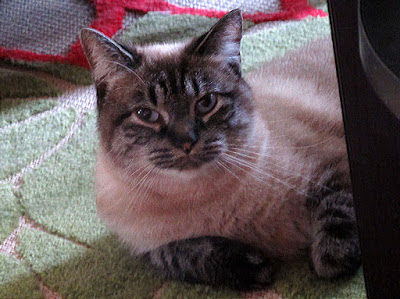 Don’t worry. That’s 12 cats. Lindy is a soft touch and has rarely met a homeless cat she wouldn’t take in.

I have many favorites at Matt and Lindy’s house (in addition to Matt and Lindy themselves), but Trooper is by far the most amazing and admirable cat. She has only three legs and sprints around the house easily. She’s sweet, outgoing, and unbelievably intelligent. She knows she’s not allowed on the dining room table (the other 12 apparently never got that memo). So, Trooper sits in her very own chair at the head of the table during dinner. Lindy passes her a morsel, which she politely accepts, after which she patiently waits for another.

Matt and Lindy had 13 cats when we were there in September having taken a friendly cat named Gerald home from Lindy’s parents’ farm. But they realized Gerald would never become a house cat. Primarily, he didn’t have much interest in the litter box and, despite having a houseful of cats, Matt and Lindy had never had a house-training problem with a single one.

Secondly, Gerald was just a bit too wild for the indoors. He kept doing things he wasn’t supposed to do. And, every time he misbehaved — like incessantly attacking Trooper as she slept — someone would yell, “Gerald!” which prompted San Geraldo to snap defensively, “What?!?”

Neither Gerald ever caught on. (I wonder if I should take San Geraldo back to the farm, too.)

If you haven’t read how San Geraldo first learned about cathouses, click here.

The game is called One Card and this is the way San Geraldo’s South Dakota family plays it.

In September, we played at nephew and niece-in-law, Ryan and Emily’s house. As each player was knocked out, they kept someone else company. Our great-nieces (really, really great) traveled around the table. Their older brother (also really and truly great) played quietly… and stewed when he lost.

I have four gazillion photos to sort through and then share. But, don’t worry, I plan to hone that down to under three gazillion. Today I’ll simply share what it looks like to travel with San Geraldo.

It’s a good thing I don’t care about what anyone thinks (within reason).

On the other hand, San Geraldo is clearly without reason.