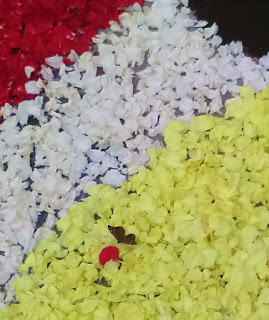 In the past few weeks we’ve gone from Toledo to Corpus Christi. And we haven’t left Spain.

Corpus Christi is a “feast” celebrating the belief in the body and blood of Christ in the Eucharist (bread and wine). That’s all the religion you’ll get from me today.

I attended the festivities because Paula (Tynan and Elena’s adored 13-year-old daughter who is a gifted oboe player) was marching at noon in Benalmádena Pueblo. Benalmádena is the town just east of us. Benalmádena Pueblo is the old town and a white village similar to Mijas Pueblo (click here).

A tradition at Corpus Christ is to adorn procession routes with intricate flower mosaics. The art on Calle Real was lovingly created in the morning and happily trod upon a few hours later. Other streets were strewn with carnations and greenery, terraces were adorned with elegant shawls and tapestries, walls were lined with flowers and plants.

It was promoted as the festival of Corpus Christi only because they couldn’t publicly admit that all the festivities were in honor of our upcoming 5-year renewal (see yesterday’s post).

(Click the images to see how big Benalmádena Pueblo went in our honor.)

Sorry for the poor sound quality.
This band is really good!
A final note (and smile) from Paula…