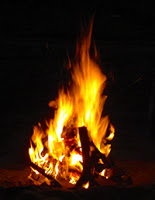 It’s 2:51 Friday morning, 24 June, the day the Christian Church designated as the Feast Day of Saint John the Baptist.

It didn’t start out that way. Before the Christians decided to “de-paganize” the day, it was called Midsummer, the pagan celebration of the summer solstice. Bonfires were lit to protect against evil spirits.

Following this ancient tradition, bonfires have been burning all night on our beaches in honor of St. John’s Eve. Revellers have been heavily drinking spirits (which may protect against evil ones; I don’t know).

At midnight, everyone quickly dashed in and out of the water and then hopped over the bonfires three times. The intention is to drive off witches and evil spirits (I guess that’s if the booze doesn’t work). Then came the fireworks.

The chiringuito (beach bar) nearest to us added additional serving areas on the Paseo and on the beach. They had an exceptionally good band performing the most of the night. For the past one or two hours (I’ve lost track), it’s been pre-recorded music at twice the decibel level. We should get some sleep when the party officially ends (any minute now).

Meanwhile, I’ve finished off the top layer of chocolates, so I’m not complaining (although I may be complaining later about that).

It’s 3:04 Friday morning and the music has stopped. The silence is deafening. I’m off to bed.