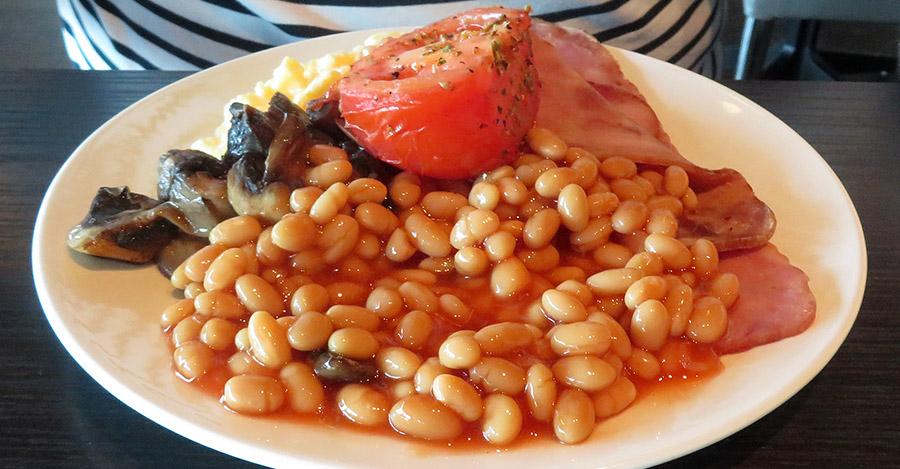 IT’S BACK TO Norway today (sadly, only on my blog). We began our travels in Trondheim, as far north as you can go before being in “Northern Norway,” We then continued to Bodø (officially northern but not very far), a charming small city. Then it was on to Sortland (really north). San Geraldo’s maternal grandfather was born about 45 minutes north of Sortland in the town of Bjørnskinn (which means “bear skin”). On every stop along the way, we had the great joy of connecting with San Geraldo’s extended family — through both his maternal grandmother (from the south) and grandfather (from the north). We’re already talking about when we can go back. Oh, and we ate.

The top photo is the first dish San Geraldo had at every hotel breakfast (before his jam with waffles). A huge pile of baked beans. Every morning. For 12 mornings. For me the only thing that could have made that worse would have been pickled beets.

San Geraldo and I went last night to Feria Málaga (Málaga Fair). Last year I enjoyed the daytime festivities in the center of the old city (click here to see last year’s blog post). This year, we decided to check out the nighttime festivities that take place outside the city center and just a bit closer to where we live.

Unlike the casetas at Feria Sevilla (click here to see those pictures), the casetas at Málaga are free and open to the public. We didn’t see the horses and carriages famous in Sevilla. And the traditional feria costumes, although in abundance, were less so than in Sevilla. But there was still plenty to see and experience and I found it less overwhelming than Sevilla’s fair. The fairgrounds are beautiful and sprawling and much more pleasant to explore. The lights were enchanting. The rides were fun to watch. Given how things progressed, it’s good I opted out of going on any.

As usual, click any image to see it big time.

The food all looked really delicious. I take that back. Some of the food looked really delicious. However, there were a number of “edibles” that looked radioactive. San Geraldo and I succumbed to enticing gofres (waffles) smothered in chocolate. It was so good going down. About a half hour later, however, the waffle and chocolate decided to repeat itself. And, let me just say, it wasn’t quite so delicious on the reflux. And there were no antacids in sight. But, I soldiered on. What’s a little heartburn?

At 11 p.m., we caught the next to last train for home. It was crowded with fair-goers, so we stood most of the way. I felt fine. But we sat for the last three stops and the waffle and chocolate decided to make another return visit (I probably shouldn’t have bent at the waist).

One stop before home, I stood up, looked at San Geraldo and said, “I feel sick.” (Apologies to my third-grade teacher; I know I’m supposed to say “ill,” not “sick.” But her name was Mrs. Doody, so…)

But back to the train. The doors opened and I signaled to San Geraldo that when I said sick, I meant I-need-to-get-off-the-train sick. He jumped off behind me at a, thankfully, dark and empty station. I quickly headed to the railing and wretched into the bushes. Now, don’t get all squeamish on me (although I would in your shoes). Nothing serious happened. Just a case of powerful reflux. And then all was well.

Truthfully, I did it all just to get San Geraldo to take a walk with me. That station is about 1.5 km (1 mile) from home.