MY PAL LUKE turned 4 in November. There was a kids’ party on the actual day. We adults finally had our own little celebration for him over the weekend. San Geraldo baked the cake; Luke was in the mood for vanilla this year. And SG did not disappoint. Just looking at the photos two days later and my mouth waters. Ditto the dinner. Pedro made an amazing paella.

UNSURPRISINGLY, LUKE WAS JUST A bit wired. He had a little pile of gifts to open. We couldn’t wait for his reaction to the interactive world globe we had gotten him. He loved it. Especially the bubble wrap and the box. Ah, to be 4. 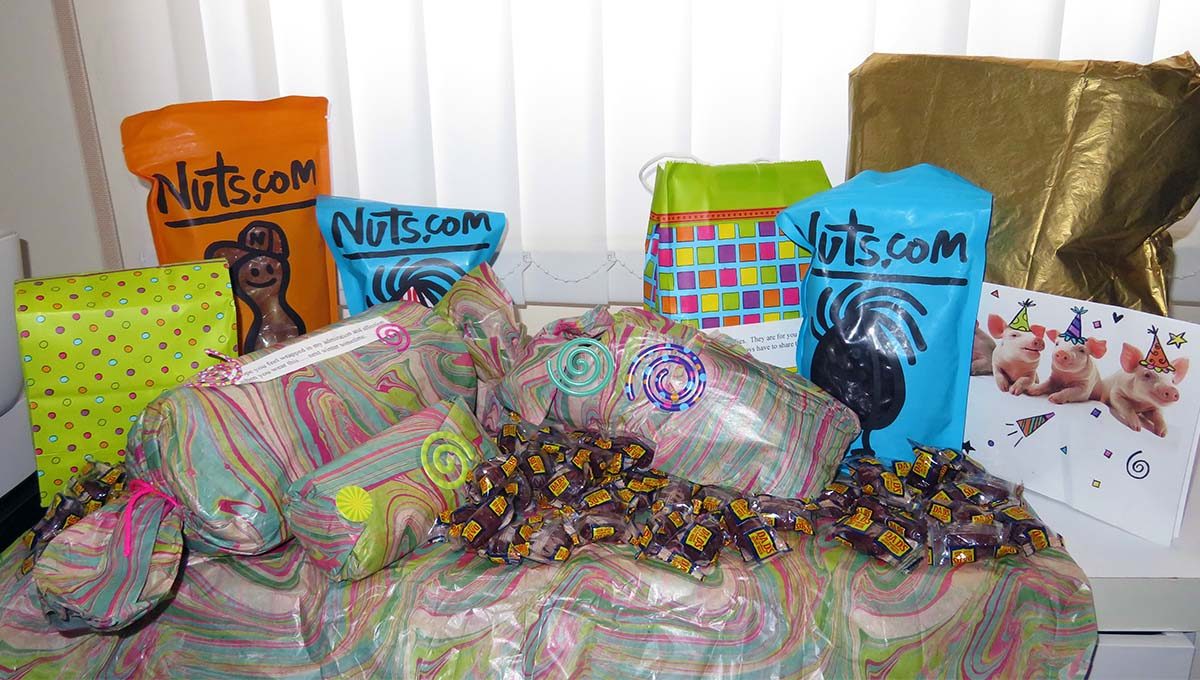 AND ONCE AGAIN, I’m at a loss for words. I received a box today filled with love. It was sent by my friend Susan in the Pacific Northwest. Susan found me via my blog and we’ve been having a running email conversation for months. It’s as if we’ve known each other all our lives. And, still, what she did for my birthday is beyond belief. Susan is clearly gifted with crochet needles. She created a scarf for me that makes me pine for winter. Catnip-filled toys for the cats that have them in ecstasy. Pot holders. Coasters. And even two penis warmers for San Geraldo. Oh, wait, I think they’re actually to slip over the handles on pots and pans to keep him from burning his hands. But I think they’d make pretty good penis warmers. Then for nourishment, there are Original DAD’s Old-Fashioned Root Beer Barrels; enough to feed an army. And bags and bags… and bags… of goodies from Nuts.com, including black licorice and crystallized ginger! I can’t believe Susan’s generosity and thoughtfulness. The gift of her friendship this year has been gift enough.

Come on. What would you use them for (if you happen to be someone with access to a penis)? 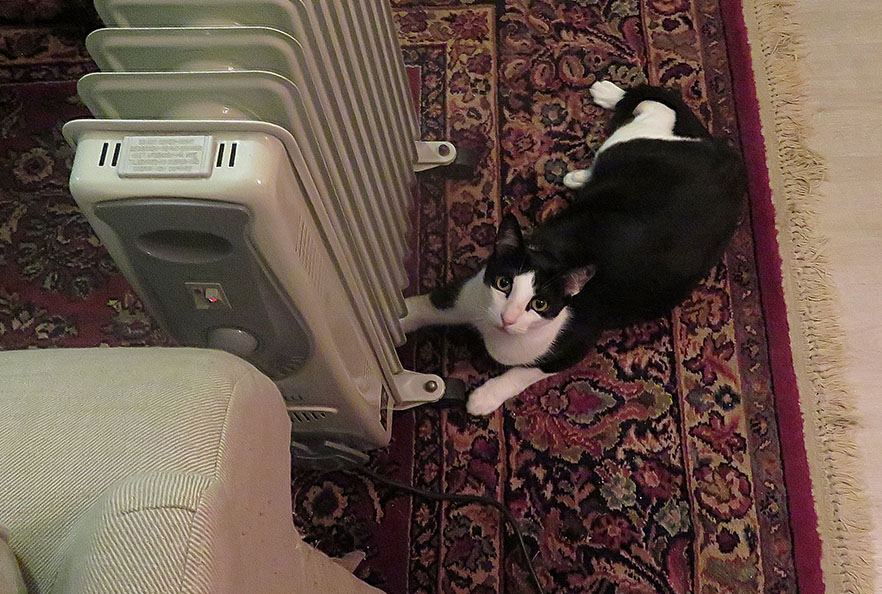 Final thoughts before bidding good-bye (good riddance?) to 2018. May 2019 bring us all a much better world.

Christmas isn’t over in Spain until the Three Kings arrive on 6 January. According to Spanish tradition, they’re the ones who bring the gifts… not Santa Claus. In Fuengirola, they arrive by helicopter… just like in the bible.

And patience is its own reward. / Y la paciencia es su propia recompensa.

THE CITY OF Fuengirola has again built their own Bethlehem right in the center of town. (Click here to see last year’s and the year before.) In addition, this time of year a nearby gift/souvenir shop converts to a shop specializing in items for your “Belén,” which is Spanish for “Bethlehem” and which is what an American might call a Nativity Scene on steroids. So, here are some of my favorites from the municipal Belén and, following the close-up of the chandelier, the magical shop called “Merino” on Avenida Condes de San Isidro.

As for the title of this post, I’ve told before (click here) of a traditional Belén figure called “el caganer” (which means “the crapper” or “the shitter”). The tradition (the Belén figurines, not the act itself) began in Catalonia and can be found more commonly around Andorra, Valencia, Northern Catalonia, and Southern France. 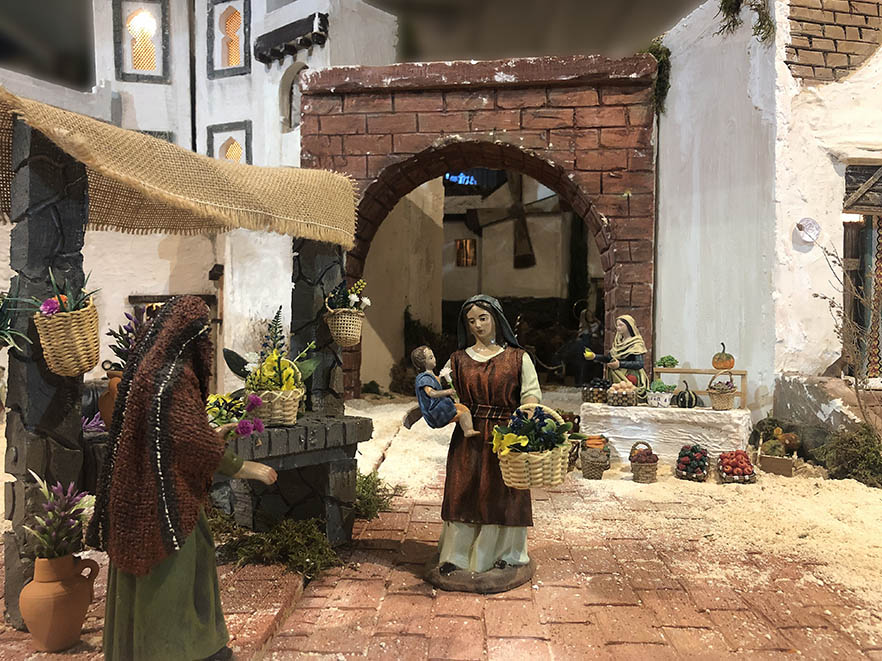 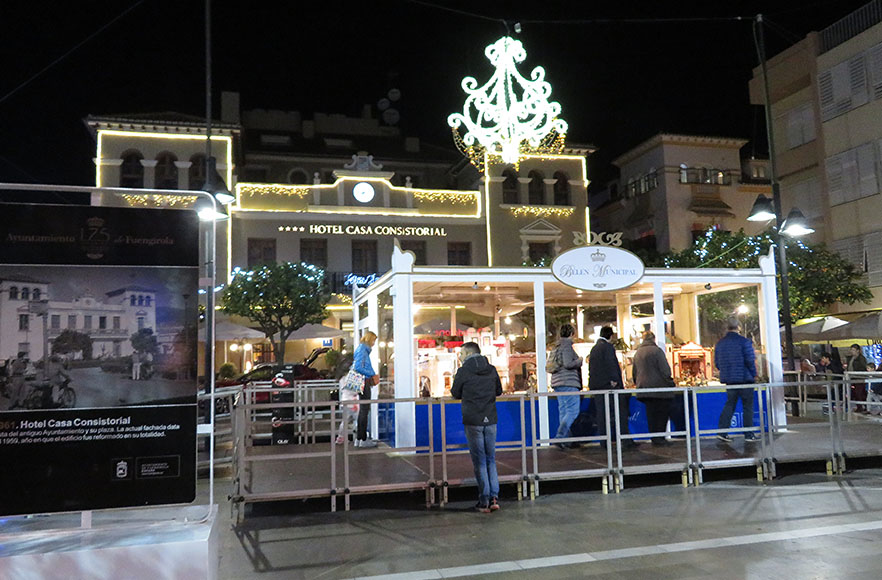 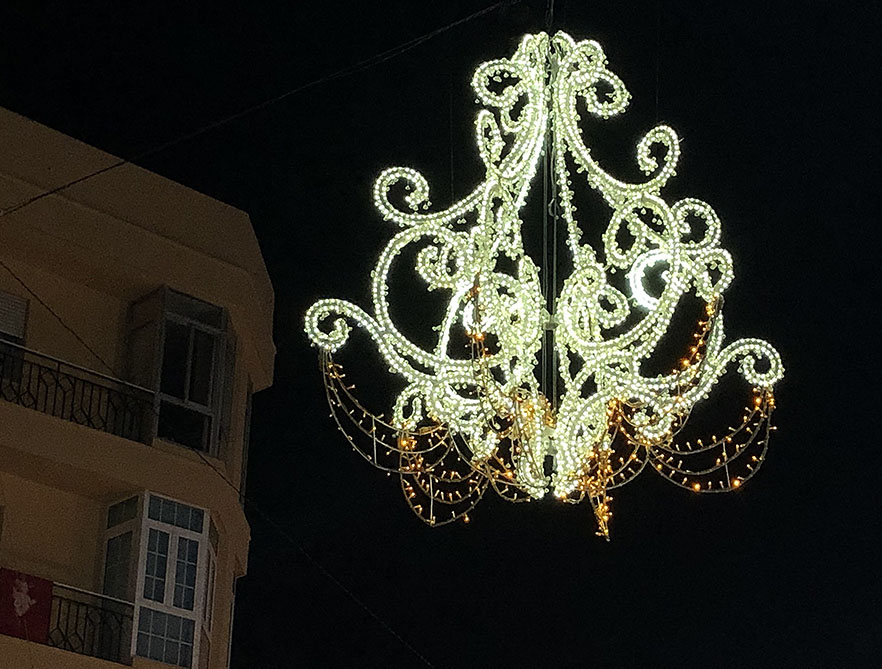 And this is what happens when the crapper is uphill from the kitchen.
Y esto es lo que sucede cuando el caganer está cuesta arriba desde la cocina.

Although I have perhaps another 400 photos from Toledo, I’ve decided to save you the agony. You’ve seen enough here (for now at least). However, we did buy ourselves some trinkets at a very special shop owned by a very special couple. The shop is called Arte and it can be found on Calle Hombre de Palo, 19 (a short street behind the Cathedral).

Toledo is known for its Damasquinado or Damasquina (in English, Damascene). It’s the art of decorating steel with threads of gold and silver — and also known as Toledo Gold. Toledo is famous for this handicraft, which is used on everything from swords (Toledo steel), knives, scissors, and other sharp instruments I try to avoid; as well as for jewelry, platters, art, and much more.

Judy bought herself a watch with a beautifully intricate bracelet band, as well as a couple of pairs of exquisite scissors for sewing.

I bought myself a wrist band/bracelet (pulsera in Spanish) and a couple of pairs of earrings.

The earrings are for the two holes in my left ear that My Mother The Dowager Duchess forbade me to pierce in 1994 (when I was 40). Months later, the first time she saw me with my ear pierced, she complained that my earrings were too small!

Although what I chose for myself was not tourist-grade trash (thats not available at Arte) it was very simply done and inexpensive. San Geraldo and I first found Arte on our own. What drew us in was a window display of some beautifully done glass pieces containing Klimt images. We ended up buying a candle holder that stands about six inches (15 cm) tall.

Toledo is also known for its Marzipan (mazapan). I had never been much of a fan of marzipan, appreciating it only as art because I didn’t realize there was more to it than the fruit forms in fruit colors. Then I discovered Spanish mazapan! Below is the box I bought at a very special shop called Santa Tomé. Don’t expect to get a taste. They’re gone. San Geraldo didn’t even get a taste. I thought he didn’t like mazapan. I swear! I really thought he didn’t like it. Honest!

But I’m not as bad as Judyshannonstreetwhat. She bought a box of mazapan and said she was going to give it to Tynan and Elena (Note: Not share with, give to).

A few days later, Judy admitted the plan had changed since there wasn’t much left in the box.

The reason? “Well, I was worried it wouldn’t stay fresh after it was opened.”