I have finally found a chocolate truffle that’s the perfect size for the limits of my appetite. Amazingly, the chocolate is made by Lindt and, as you can see from the photo, one fits perfectly in the palm of my hand. 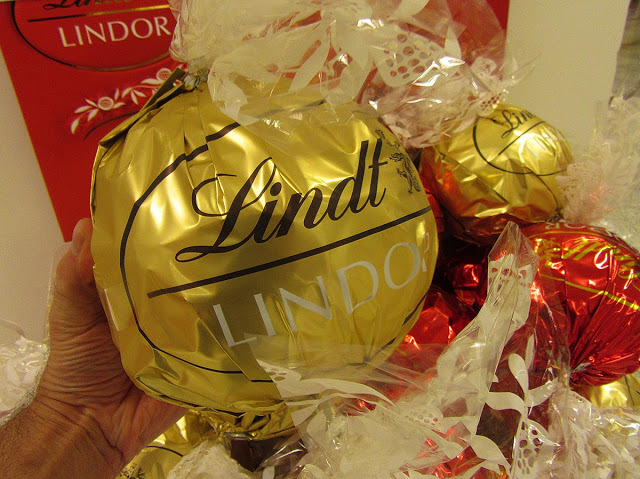 While we’re on the subject of size and quality, Meson Salvador re-opened after an 8-week renovation project that left nothing of the original restaurant except the amazing staff and food.

Elena’s birthday was in November but we decided to extend the celebration, so we had another birthday dinner at Meson Salvador Thursday night. Our waiter, David, gave Elena the royal treatment. She ordered ribs and he made sure they were super-sized.

After dinner, Elena asked for a teensy bit of cinnamon ice cream for dessert. David got carried away but provided a size-appropriate spoon. 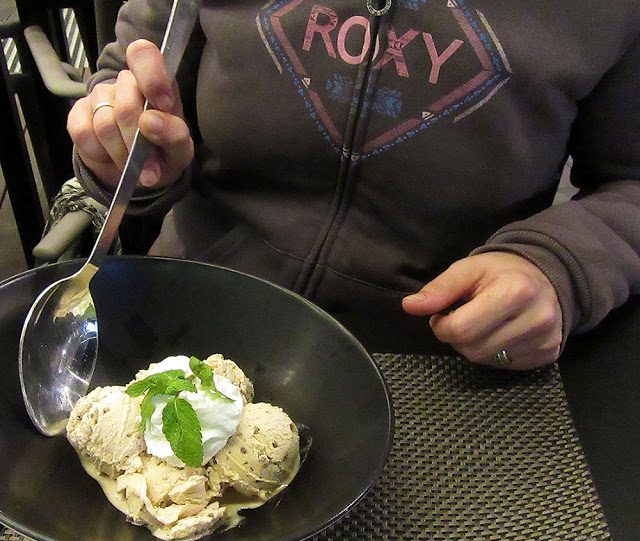 Did you know that cinnamon is considered (by some) to be an aphrodisiac? Elena happened to mention that. It was news to the rest of us. We all dipped our spoons in her ice cream.

December 6 was Constitution Day here in Spain. The holiday was observed on Monday the 7th. Tuesday the 8th was the Feast of the Immaculate Conception, another national holiday.

I couldn’t find a phone number for our gym, but their website notice board didn’t say they were closed. So we took the 20-minute walk to the gym and found it dark. I said, “Well, at least we’re getting our cardio today. It’s nearly 3 miles round-trip.” San Geraldo agreed.

Five minutes later, we were walking home along the Paseo once again. San Geraldo felt we deserved a reward for our efforts. It had begun to drizzle, so he suggested we get in out of the rain — at the first ice cream shop we passed. I didn’t disagree. (He’s a terrible influence.)

After our ice cream, we continued home. But a few minutes later, the owner of a couple of local restaurants, one of which we frequent, spotted us and insisted we stop for a drink. He had been in Germany opening another restaurant and we hadn’t seen him in months. It would have been impolite to refuse. We agreed to a cup of cafe con leche. We sat with him for about 20 minutes — refusing the shots (chupitos) he offered to wash down the coffee — and eventually made it home.

We were so full that we waited an entire two hours before each having a slice of the Jamaican Black Cake San Geraldo had baked the day before.

Click here for the basic recipe. San Geraldo adapts it. (People who know how to cook can do that.)