IT WAS OUR third annual Halloween dinner at Mesón Salvador, so, yeah, we knew what to expect. We knew the place would be festive (and macabre) and we knew the food would be creative, beautiful, unusual, and dangerously delicious. Still, our wonderful family here in Los Boliches had some surprises up their tattoo sleeves. 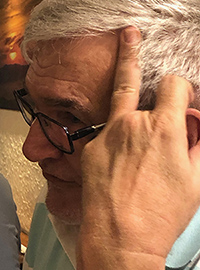 San Geraldo walked into my office the other night and said, “I have chicken breasts in the refrigerator. I can make…”

“Popcorn?!? Can you put the chicken in the microwave and press the popcorn button? I hav…”

“I haven’t had popcorn in ages!”

“Here are the options. They all involve chicken.”

I think I sometimes exhaust San Geraldo. (We went out for pizza.)

“He finally settled on a finger. I’m pretty sure it was the wrong one.” 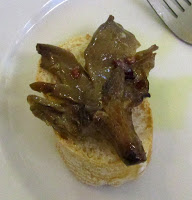